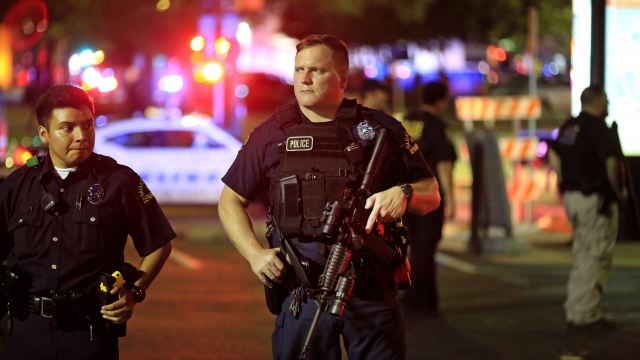 SMS
Dallas Shooter Had His Weapons Confiscated During His Time In The Army
By Briana Koeneman
By Briana Koeneman
August 18, 2016
The shooter's commanding officers took his weapons from him in 2014, according to documents the Army released.
SHOW TRANSCRIPT

According to investigation documents the Army released earlier this week, the shooter — identified as Micah Johnson — had his gun taken away from him by his commanding officers in 2014 after an incident in his unit.

In the partially redacted report, a female solider claimed the shooter sexually harassed her while they were stationed in Afghanistan. She also accused him of stealing her underwear.

SEE MORE: Dallas Shooting: The Ethics Of Using A Robot To Kill

The soldier said she had known the 25-year-old for years and that they had "fights and disagreements" in the past.

The report quotes one of his superiors as saying: "I asked if for safety reasons we should relieve [PFC] Johnson of his firearm and any bladed weapons in his possession. ... We locked them in our mail room for security."

It's unclear how long Johnson was without his weapons, but an Army official said in a statement Wednesday they were confiscated "simply out of an abundance of caution."

The Army ultimately decided Johnson did sexually harass the soldier, and he was sent back to the U.S. after the incident.

An Army official told USA Today he didn't appear "agitated or a threat to himself or others" when his weapons were confiscated and that it was "unusual" for military authorities to take such action.

On July 7 of this year, Johnson killed five police officers and wounded nine more in a shooting at a protest against police violence in Dallas. Officers later killed him with an explosive device.