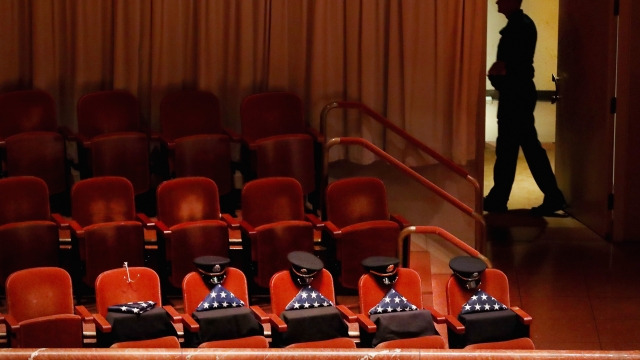 SMS
Dallas Memorial Service Transcends Politics, Focuses On Unity
By Katie Link
By Katie Link
July 12, 2016
"With their deaths we have lost so much. We are grief-stricken, heartbroken and forever grateful," former President George W. Bush said.
SHOW TRANSCRIPT

"Another community torn apart, more hearts broken, more questions about what caused and what might prevent another such tragedy," President Barack Obama said.

"With their deaths we have lost so much. We are grief-stricken, heartbroken and forever grateful," former President George W. Bush said.

Days after a gunman targeted police officers in Dallas, five fallen officers were remembered at an interfaith memorial service.

Both presidents speaking at the service acknowledged the grief and tension the nation feels.

The presidents reached across party lines in an effort to unite the country after a week of protests, violence and extreme racial tension.

"But Americans, I think, have a great advantage, to renew our unity we only need to remember our values — we've never been bound together by blood," Bush said.

"As Americans we can decide that people like this killer will ultimately fail, they will not drive us apart. We can decide to come together and make our country reflect the good inside us," Obama said.

This video includes clips from the White House and images from Getty Images with music from "CGI Snake" - Chris Zabriske / CC BY 3.0