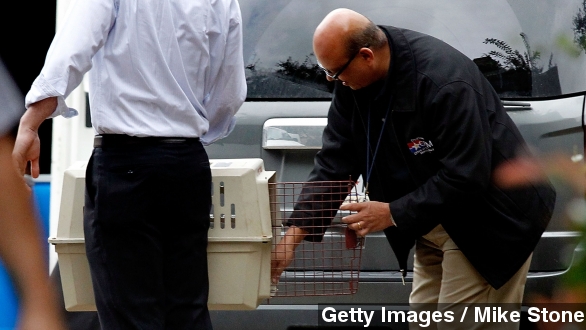 SMS
Dallas Dog Raises Questions About Animals And Ebola
By Amy Kluber
By Amy Kluber
October 14, 2014
The latest Ebola victim is being treated in Dallas. Now many wonder what will happen to her dog in light of Spain's controversial euthanasia.
SHOW TRANSCRIPT

Texas nurse Nina Pham is the first person to contract Ebola within the U.S. She's currently being treated at a Dallas hospital — but what will happen to her pet dog?

It was the same question raised in response to a nurse who contracted Ebola in Spain. The Madrid later government made the decision to have the woman's dog euthanized, over fears it could be a carrier of the virus.

But it seems Pham's dog will avoid that same fate. Dallas Mayor Mike Rawlings told USA Today the dog will be kept safe and quarantined in another location while Pham is treated. Her apartment is also being decontaminated.

The Dallas Police Department has even been keeping the public updated on the dog during this process.

But why is there so much attention on a furry friend? Some media outlets note what happened in Spain versus the States highlights what experts don't know.

The reality is — there's not a lot of information about the risk of Ebola in animals or whether humans can even become infected by domesticated pets.

Here's what we do know — The Washington Post points out Ebola can spread to humans by way of other mammals. One possible way is by eating infected meat. But it's still unclear whether dogs transmit Ebola through bodily fluids in the same way humans do.

A medical expert tells CNN this shouldn't worry anyone. "Pets have not been a feature of Ebola spread, whether in Africa and certainly not here in the developed world."

According to the Centers for Disease Control and Prevention, there have been no reported Ebola sicknesses in dogs or cats so far. Probably because there isn't even a known test available for animals.

As for why the dog in Spain was euthanized, the International Society for Infectious Diseases says, "In some legal systems, as in the law of the European Union, the application of the precautionary principle has been made a statutory requirement in some areas of law."

Nina Pham continues to receive treatment as her dog is kept safe. She says she is currently doing well after receiving a blood transfusion.