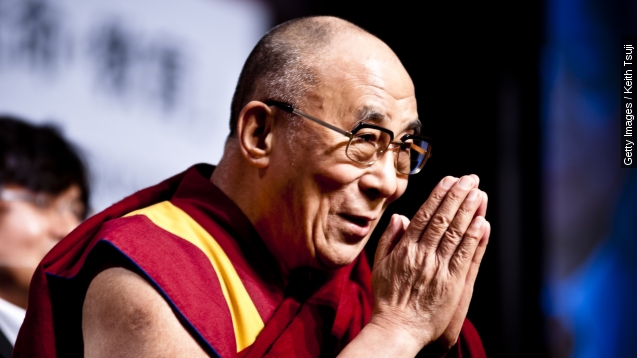 The Dalai Lama celebrated his upcoming 80th birthday in style this weekend with his first appearance at the Glastonbury Festival in the U.K.

As part of his U.K. tour, Tibet's exiled spiritual leader said the festival was for the people, "not governments or politicians."

"The very purpose of our life is a happy life," he said to an audience of about 1,000 people.

The presence of the Dalai Lama has garnered threats from China and sparked protests from Shugden Buddhists across the U.K. who accuse the spiritual leader of discriminating against them.

China reportedly issued a threat to the founding family of one of Europe's largest music festivals against booking the controversial leader, saying he essentially has a platform to "engage in anti-China splittist activities."

But the Dalai Lama didn't focus on China.

He instead spoke of the conflicts in the Middle East. Although he didn't specifically mention ISIS, he said, "In this very moment, in some part of the world, like Syria, Iraq, Nigeria and some other places — they're killing, human to human being ... And the worst thing [is that] conflict, killing each other, in the name of their faith."

The appearance of the Dalai Lama at the festival does not help U.K.-China relations that have struggled to recover since the leader's 2012 meeting with British Prime Minister David Cameron. (Video via London School of Economics and Political Science)

Shortly after the meeting, China canceled a senior official's visit to the U.K. because the meeting had reportedly "[hurt] the feelings of the Chinese people."

The Dalai Lama, the head of Tibetan Buddhists, was exiled from his home in 1959 after China occupied the country. He has long called for Tibetan independence from China.