Deja Vu? Another Part Of Ukraine Calls For Independence 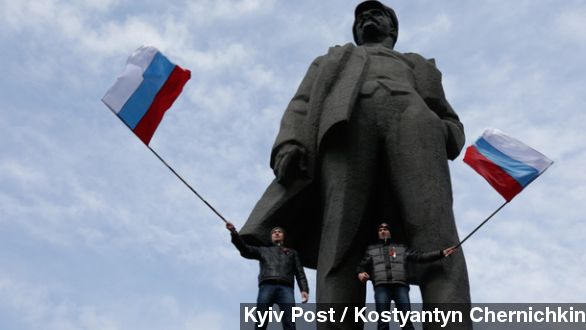 SMS
Deja Vu? Another Part Of Ukraine Calls For Independence

By Elizabeth Hagedorn
April 7, 2014
Pro-Russian activists in Ukraine's Donetsk have called for independence in a manner that echoes Crimea's breakaway from the country.
SHOW TRANSCRIPT

Just when you thought things were quieting down in Ukraine, politicians in another part of the country have declared their city a republic and set a date for a referendum. Sound familiar?

"Crimea went ahead with a referendum and voted overwhelmingly to join Russia." (Via PBS)

This time around in the eastern city of Donetsk, pro-Russian activists have seized local government offices and declared the city a "people's republic." (Via Channel 4)

The region has been home to a secessionist movement ever since Ukraine's pro-Russian president was ousted in February and a Western-leaning interim government took over. (Via YouTube / Oleg Streletc)

Now, the regional legislature in Donetsk has scheduled a session vote for no later than May 11 and appealed to President Vladimir Putin for help.  (Via The Voice of Russia)

That's pretty similar to the way things went down in Crimea about a month ago, and it was enough for Ukraine's acting president to say Russia was "playing out the Crimean scenario." (Via RT)

Former U.S. ambassador to NATO Ivo Daalder put it this way: "Events in #Donetsk have the smell, feel, look of #Crimea." (Via Twitter / @IvoHDaalder)

Even more troublesome for Ukraine's interim government, the unrest isn't limited to Donetsk. Similar protests have spread to other cities. (Via Euronews)

"I don't think people are worried that the Russians are massing troops so that they will roll all the way to the Polish border. … But what Putin's doing is gradually nibbling away." (Via Al Jazeera)

All of this has some experts worrying President Putin may be trying to take back a territory once known as New Russia, or "Novorossiya" — a term you hear a lot from the protesters. (Via Wikimedia Commons / DimGrits)

The New Republic's Linda Kinstler explains: "The protests are almost certainly Kremlin-backed, part of Russia's longstanding plan to 'federalize' Ukraine, and to reassert control over the territory that used to be called Novorossiya."

Foreign affairs analyst Robert Cutler writes in The Huffington Post, a Russian occupation of that area would mean "Ukraine would lose its entire Black Sea coast and become landlocked."

But are we getting ahead of ourselves? After all, there are some big differences between Crimea and Donetsk.

For one, the mood is different. As the BBC notes, opinion polls in Donetsk suggest a good number of citizens want to stay in Ukraine.

And as The Washington Post's Adam Taylor points out, for hundreds of years, Crimea was part of Russia. Donetsk doesn't have the same historical ties — having been founded by a Welsh businessman back in 1896.

Russia would probably disagree. A statement from the Kremlin said it was closely watching the events unfolding in eastern Ukraine and urged Kiev to heed the demands of the protesters.