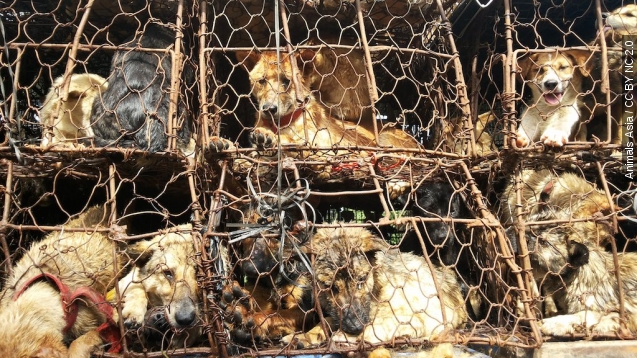 By Katie Link
June 9, 2015
Each year, the southern Chinese city of Yulin cooks and eats about 10,000 dogs during the summer solstice.
SHOW TRANSCRIPT

The decades-old tradition of eating dog and cat meat during the summer solstice seems normal for residents in the southern Chinese city of Yulin.

Each year, some 10,000 dogs are cooked and consumed in the name of health and tradition.

But animal rights groups angered by the tradition have tried to grab the attention of media outlets thousands of miles from the festival, and it looks like it's working.

Hashtag Stop Yulin 2015 is gaining power, and this year, activists in the western half of the world are joining the fight.

City government officials in Yulin said they shut down the festival last year in response to outside media pressure. But Vice reports locals participated in the customs anyway. So will they do the same during this summer solstice?

"Despite all this and spurred on by fierce backlash across China, some Yulin locals say this year they're even more set on plowing down man's best friend by the cageful," said a Vice correspondent.

Humane Society International's petition to stop the festival has hundreds of thousands of signatures, and another U.S. nonprofit based in California is asking for donations to help end the killing of dogs and cats for food in China.

"We have a growing team of dedicated activists but not nearly enough to take this festival down. We need investigators to track the dog thieves on the ground in China and lobbyists to push forward more humane laws," according to a report from an animal activists group.

Media outlets — such as CNN and Vice — say activists' allegations of animal cruelty are backed by what reporters have seen on the ground.

Tiny cages, dogs still wearing collars and crying puppies are the norm during transport days leading up to the festival.

In a country that currently doesn't have any animal welfare laws, Chinese activists have done their part to try to curb the tradition by emphasizing food safety threats. From street protests to paying for the release of captured dogs, the efforts might be working. The New York Times reports meat sales during the 2014 Yulin festival only reached a third of what they were the previous year. (Video via YouTube / Lisa Price, CNN)

However gruesome it might seem to some, tradition is tradition. For the nearly 7 million people living in Yulin, practicing their ancestors' rituals is an important part of their culture.

This year, the festival begins June 22.