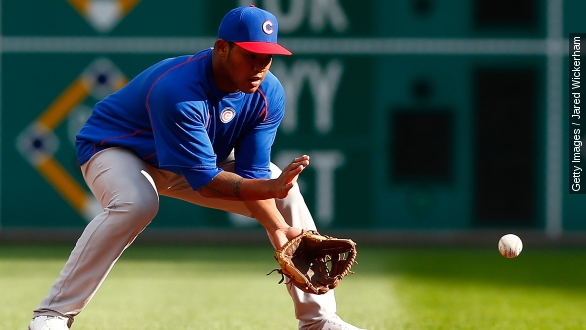 SMS
Cubs' Raw Talent Likely Won't Make It To World Series
By Matt Moreno
By Matt Moreno
April 23, 2015
The Chicago Cubs continue to bring in talented young players. Still, they'll likely have to wait for it to all pay off in the future.
SHOW TRANSCRIPT

The Chicago Cubs' future is here, but they won't be playing for the World Series quite yet. Tuesday, the Cubs called up 21-year-old middle infielder Addison Russell. (Video via Knoxville News Sentinel)

This just a week after the team brought up 23-year-old third base prospect Kris Bryant. (Video via Red Bull)

Both now join fellow prospect Jorge Soler, 23, who broke camp with the Cubs this year. (Video via Chicago Sun-Times)

Which is why a good chunk of people are rallying behind the team for a playoff-caliber season — some going as far as picking them as World Series winners.

Excited, Cubs fans? You should be — just not too excited too soon.

Because the chances of the Cubs winning the World Series this year aren't great, despite the team going as high as 12-1 odds in some places during the offseason. That's a big improvement on their 65-1 odds last year.

There's no doubt the Cubs are a solid team, but they're built for longer-term success, especially their offense. The average age of a Cubs hitter is one of the team's youngest in the last half century.

Since 1964, the Cubs have had 14 seasons when their batters' average age was younger than 28 years old — just two of those years resulted in winning seasons.

The average age of the Cubs offense, just over 27 years old, places the team as this year's third youngest group of hitters. Last year, of the top 10 youngest offensive teams, just two of them, the Pirates and the Mariners, finished with winning records. The Mariners missed the playoffs while the Pirates lost in the Wild Card game.

Plus, the Cubs have a huge run differential gap to improve on from last year. Here's how the last five World Series winners have fared in run differential — runs scored average at 739, while runs allowed sit around 639. The Cubs last year? Outscored by nearly 100 runs.

A writer for Bleacher Report urges everyone to keep expectations low for this year: "Expecting a team composed of numerous rookies to be a winning team now is an enormous leap from reality. Perhaps a better slogan for 2015 would be 'the doorstep to the future.'"

This year, Cubs fans will get a slice of what the future holds but won't get the whole pie. It will likely take another year for the Cubs to relieve the curse of the ol' billy goat.

This video includes images from Getty Images, Eric Molina / CC BY 2.0, statistics from Baseball-Reference.com and music from