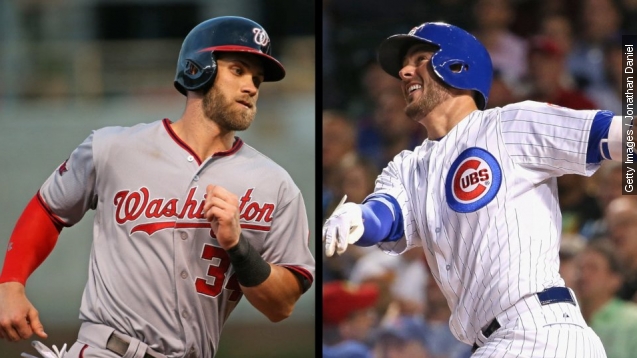 SMS
Cubs-Nationals Will Be A Matchup To Watch For Years To Come
By Matt Moreno
By Matt Moreno
May 27, 2015
The Kris Bryant-led Cubs and the Bryce Harper-led Nationals proved Monday they're exciting young ballclubs with promising futures.
SHOW TRANSCRIPT

The Chicago Cubs beat the Nationals Tuesday night in thrilling walk-off fashion, with an RBI double off the bat of Addison Russell.

But the Cubs-Nats series is much more than day-to-day walk-offs. This series features baseball's next-generation of superstars and is one you should be paying attention to, for years to come.

If you didn't know about young stars Kris Bryant and Bryce Harper already, Tuesday's game was a nice introduction. (Video via ESPN)

Harper smacked his National League-leading 17th home run in the seventh inning Tuesday — a home run he thought was going to be a lazy fly ball.

"Didn't think he hit it well. He actually flings his bat in frustration and then he says 'wow' when he crosses home," Fox Sports reports.

And then there was Bryant, tying the game up in the eighth inning with a massive 477-foot home run.

"Hit the top corner of the Cubs scoreboard in left field. That might have left a mark," WFLD reports.

Both 22-year-old Harper and 23-year-old Bryant are offensive leaders for their respective clubs and will potentially be facing off against each other with a lot on the line for years to come.

Washington and Chicago are two of the MLB's youngest teams, with an average age of 28.6 for the Nats and 28.3 for the Cubs.

The Cubs look to be in position to capture their first winning season in years, and their core players are all well below 30.

The Nats are chugging along atop the NL East — as they've been doing the past few seasons — and are right in line with the Cubs when it comes to a young group of franchise stars.