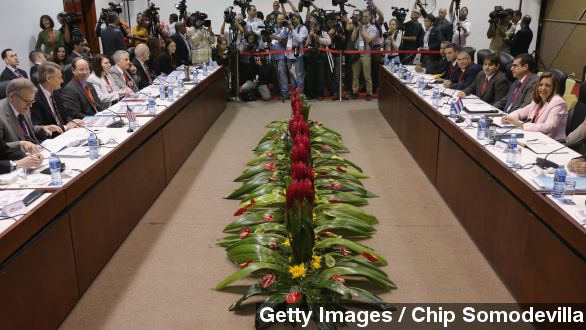 SMS
Cuba, U.S. Talks Already Hit Snag Over Immigration
By Jay Strubberg
By Jay Strubberg
January 21, 2015
The historic talks between the U.S. and Cuba are underway, but the two countries are at an impasse over immigration.
SHOW TRANSCRIPT

"The United States of America is changing its relationship with Cuba," President Obama said.

President Obama made clear his intentions to restore diplomatic ties between the U.S and Cuba last month.

Wednesday, the two countries engaged in historic talks as the U.S. sent its first high-ranking official to the communist island nation in decades.

But, while U.S. officials say it was a good start to smoothing over the relationship, the two countries have already found an issue to disagree over: immigration.

Cuban officials insisted the U.S. put a stop to immigration policies that give a virtual safe haven to any Cubans who seek refuge in the United States. (Video via CBS)

But U.S. officials said they don't plan on changing the policy.

She's quoted in the Miami Herald saying they "constitute the main incentive and the principal stimulus for illegal immigration."

Moving forward, Cuba says it wants to be taken off the U.S.'s list of state sponsors of terrorism while the U.S. wants Cuba to pledge progress on human rights issues. President Obama has urged Congress to work on ending the 53-year-old trade embargo, but no word on when that might happen.