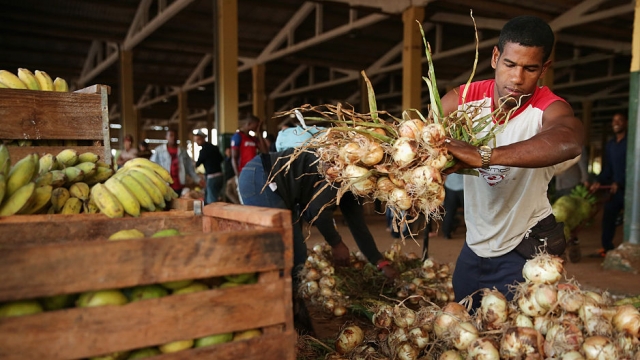 SMS
Cuba Says US Trade Emargo Cost It $4.6B Last Fiscal Year
By Ethan Weston
By Ethan Weston
September 10, 2016
Since the embargo started in 1960, Cuba says it's missed out on nearly $126 billion in total.
SHOW TRANSCRIPT

Cuban officials are saying one big, sarcastic "thanks" when it comes to the easing of U.S. trade embargoes against the island nation.

SEE MORE: This Cuban Product Is Making Its Way Back To The US After 50 Years

Even though the U.S. and Cuba began normalizing their relationship in 2014, the U.S. hasn't completely lifted its trade embargo on the island nation.

That embargo has been in place since 1960 — the year after Fidel Castro took control of the country.

Castro ousted a U.S.-backed government in Cuba and established a communist system in 1959.

And in the nearly 56 years since the embargo started, Cuba says it's cost the country $125.9 billion, though that total includes hypothetical figures, like how much money Cuba could've made doing business with the U.S.

Some changes are coming quicker than others. Since relationships have begun to normalize, the U.S. and Cuba have opened embassies and eased travel restrictions; you can even take commercial flights there now.

And for what it's worth, President Obama has called for the embargo to be lifted, but it's up to Congress to actually do that.

Next month, the United Nations will vote on a nonbinding resolution condemning the U.S. embargo — a resolution put forth every year since 1992. It nearly always passes overwhelmingly, but the U.S. consistently votes against it.