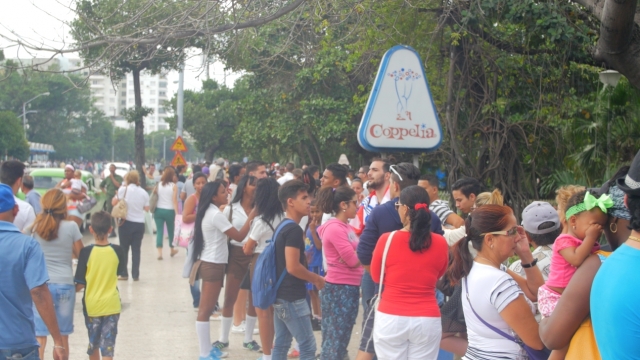 SMS
Cuba's Odd 2-Currency System, As Explained By Ice Cream
By Zach Toombs
By Zach Toombs
March 30, 2016
Cuba has two currencies — one used mainly by foreigners, one used by most Cubans. And that creates a strange divide in the country's economy.
SHOW TRANSCRIPT

All these Cubans are waiting hours in line — for vanilla ice cream.

"There's only vanilla," one woman told us. "Only one flavor."

"50 years, for two hours once a week," another person waiting in line said.

Meanwhile, here's the line to get several flavors: vanilla, strawberry, chocolate and chocolate swirl. There is no line. And they straight up told us that ice cream was of a better quality. So, here's why nobody's over there.

Cuba is a country with one political party and two currencies. These are CUCs, or convertible pesos, mainly for tourists and the wealthy. And these are Cuban pesos, which is what almost all Cubans are paid in — and what they use daily.

This creates kind of a strange divide between a CUC economy and a pesos economy. Technically, anyone can use both, but currency exchanges are rare and expensive for most Cubans — which is a problem, since some higher-end places only accept CUCs — and because they often buy you a better quality product. At the same time, a lot of things are overpriced when sold in CUCs, so buying in pesos is less expensive.

The separation between the two currencies is especially obvious at La Coppelia, Havana's ice cream institution. Fidel Castro has a well-documented obsession with ice cream. The CIA tried to poison his milkshake in the '60s — a plan then-CIA Director Allen Dulles personally approved.

And after Castro took power, he looked at Howard Johnson's — and decided that if America could have 28 flavors, Cuba could have 29. So his secretary made building La Coppelia a personal project. It takes up a full city block in the middle of Havana.

"You wait in your queue for the Cuban pesos queue, and you come and have your ice cream," Layla, our fixer, told us. "It's a tradition, I think."

But La Coppelia also has two separate lines and two separate offerings entirely for the two currencies. You can see the line to buy in Cuban pesos goes down the block in both directions.

"I've been here a while with my friends waiting," one woman told us. "For at least an hour."

When we asked a young man why he was in the pesos line and not the CUC line for more flavors, he asked, "Do you think parents have money to give us with short notice?"

CUCs are pegged to the value of the U.S. dollar. That's because the CUC was introduced in 1994 basically as Cuba's replacement for the dollar, which used to be accepted at many tourist spots. In 2013, Cuba's government said they'd phase the CUC out and merge it with the peso, but that transition is coming slowly.

"I think everyone's eager just to have one currency," Layla said. "It's confusing for most Cubans."

And as long as Cuba has two currencies, it'll be a nation with two lines — one of them a lot longer.