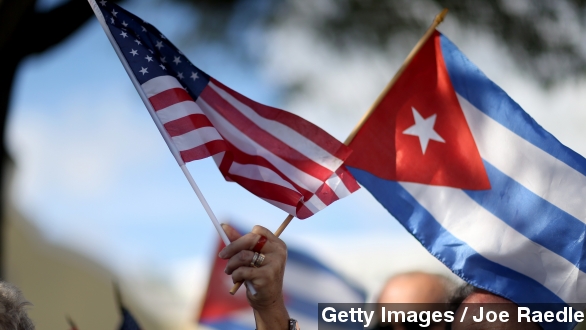 There hasn't been a full-fledged reconciliation between the U.S. and Cuba just yet, but news this week that Cuba released dozens of political prisoners could be another step in helping re-establishing relations.

Cuba freed as many as 38 opposition activists this week, according to dissident groups like the Patriotic Union of Cuba, or UNPACU.

"We welcome Cuba’s decision to release a substantial number of prisoners whose cases were directly raised with the Cuban government by my team," President Barack Obama said.

Those releases were a part of the deal struck between U.S. and Cuba back in December.

Principal Deputy Press Secretary Eric Schultz told reporters Friday the White House is "pleased with the progress." A total of 53 prisoners were mentioned in the December deal and Schultz said he's confident Cuba will follow through with releasing the remaining prisoners.

Also this week, a new coalition of U.S. agriculture businesses held a news conference in Washington, D.C. to urge Congressional lawmakers to lift the trade embargo against Cuba.

Of course, only Congress has the power to do that. Although Congressional Republicans and some Democrats have said easing restrictions on Cuba is a bad idea, Sen. Marco Rubio from Florida said this week he's at least willing to hear the administration's argument.

Rubio told reporters, "I think their arguments are going to fail, but we're going to take the process seriously."

It's important to note Rubio was one of the first Congressional lawmakers to speak out against Obama's plans to strike a deal with Cuba. (Video via NBC)

Looking ahead, the U.S. and Cuba plan to hold annual migration talks in Havana Jan. 21-22. This will be the first round of talks since President Obama's December announcement on Cuba.