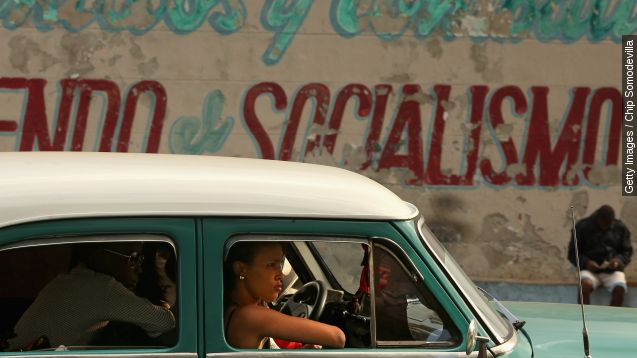 We've seen months of historic U.S.-Cuba moments, from the symbolic handshake between President Obama and Cuban leader Raul Castro to the announcement of restored ties.

Now we have seen Secretary of State John Kerry raise the American flag over the embassy in Havana. (Video via The White House)

“I feel at home here because this is truly a memorable occasion. A day for pushing aside old barriers and exploring new possibilities," Kerry said.

But will this new relationship benefit both countries economically and culturally, as U.S. and Cuban officials have suggested?

Over the past few years, the Cuban government had already implemented some gradual economic reforms, but both countries think the possibility of lifting the embargo and increasing trade could be a big economic opportunity. (Video via U.S. State Department)

For the U.S., Fortune says that will likely come in the form of agricultural and telecommunications exports. For Cuba, normalizing relations could lead to profits from tourism and remittance allowances.

As for the culture shift, many are pointing to possible improvements in human rights in Cuba and improvements to infrastructure.

"We have many things we need to work on together, ranging from law enforcement, maritime security, education, health, telecommunications," Kerry said.

On health, better relations could mean increased research collaboration and transportation of medical equipment to Cuba. (Video via NewsBeat Social)

"I think we have had to lower our standards in order to raise our flag in Havana. We aren't defending human rights, we aren't defending the very idea of representative democracy," said Roger Noriega, a fellow at the American Enterprise Institute.

And many U.S. politicians have been critical of the lack of concrete human rights changes from the negotiations.

"The United States should only have a new relationship with Cuba when there is progress on basic human rights for the Cuban people, including the release of political prisoners, fair and free elections, the respect of the rule of law," said former Florida Gov. Jeb Bush.

At the request of the U.S., Cuba announced the release of 53 Cuban political prisoners at the beginning of the year. But there have been various reports of Cuban protesters being arrested since then. (Video via WFOR)

The two countries still have a lot of differences to work out, but the U.S. flag is now flying over the U.S. embassy in Havana for the first time since 1961.