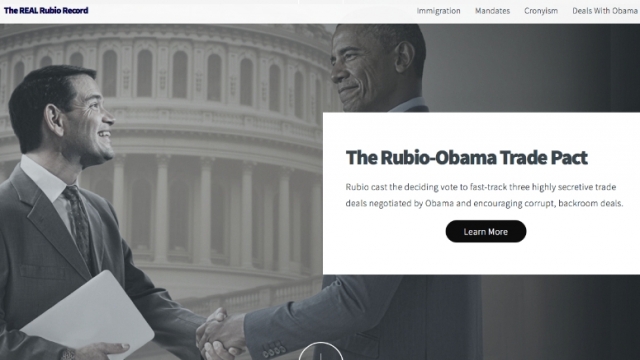 The photo, which features the caption "The Rubio-Obama Trade Pact," first appeared on the Cruz campaign-funded website, The Real Rubio Record. That is, until Rubio's camp noticed it had been doctored.

Rubio senior adviser Todd Harris told reporters Thursday: "This person, we don't know who that is, but they photoshopped Marco's face onto somebody else."

"It's not real. It's a photoshopped picture of something that never happened, which I think is now par for the course for the Cruz campaign. They make things up," Rubio told CNN.

And the stock photo the image is based on can be found with a simple Google search using the words "businessmen shaking hands."

The Cruz campaign didn't immediately admit to altering the image.

A spokesperson told CNN: "If Rubio has a better picture of him shaking hands with Barack Obama, I'm happy to swap it out. Two days before presidential primary in South Carolina, they want to talk about a picture we used."

And it looks like they may have found a better one. As of Friday morning, the image in question was nowhere to be found on The Real Rubio Record.