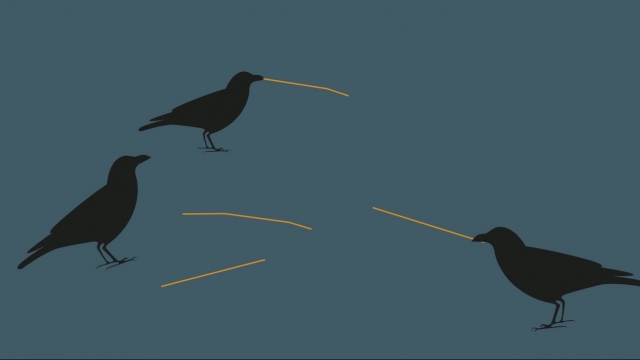 SMS
Crows Learn To Use Tools When There Aren't Woodpeckers In The Way
By Evan Thomas
By Evan Thomas
September 14, 2016
On isolated islands, crows poke around for food with sticks because woodpeckers aren't there to eat all of the hard-to-reach bugs.
SHOW TRANSCRIPT

We know crows are smart. One species even famously uses tools to get food. But scientists are only just now learning why crows would evolve such an amazing ability — and, bizarrely, the reason involves woodpeckers.

Crows living on the island of New Caledonia in the South Pacific use sticks to dig insects out of trees and logs. Researchers just found another species native to Hawaii that does the same thing.

The birds appear to have evolved their stick prowess over time. They don't have to teach it to each other. They just know how to use sticks, and they have beaks that help them use the tools well.

But Hawaii and New Caledonia are more than 3,800 miles apart as the, um, crow flies. They're both isolated islands. So how did the crows on both islands learn to dig in trees with sticks, like woodpeckers do with their specialized beaks?

Easy: Those woodpeckers weren't there. They aren't native to the islands, but there are still plenty of bugs around under the tree bark. That opens the door for other animals to develop unique ways to get at those tasty insects.

The same thing has happened with aye-ayes and other mammals. Woodpeckers don't live in Madagascar, so the aye-ayes there evolved long, thin fingers to get a first crack at the insects in local logs.

This competition for food sources might help explain why tool use among birds happens in the first place, and why it's so rare. The researchers say other species of foraging crows might have the same affinity for tools — though it probably depends on whether there are woodpeckers nearby.