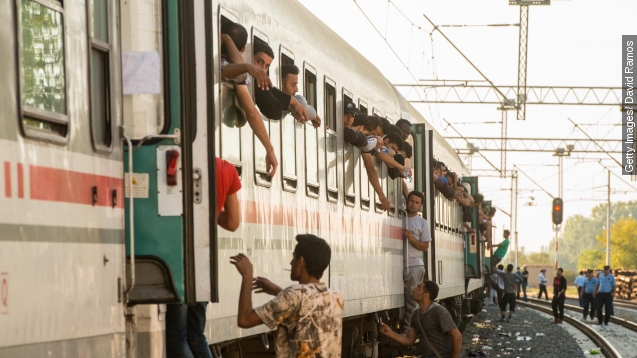 SMS
Croatia And Serbia Form Rare Alliance To Transport Refugees
By Bell Johnson
By Bell Johnson
November 3, 2015
In a rare form of cooperation, Croatia and Serbia are helping refugees cross their borders in an effort to help alleviate the EU migrant crisis.
SHOW TRANSCRIPT

The refugee crisis in Europe has inspired a rare agreement between Serbia and Croatia to help resolve the growing border crossing complications in the West Balkans. (Video via United Nations High Commissioner for Refugees)

The two nations don't often cooperate; Croatia's declaration of independence sparked a bitter ethnic war, which caused over 100,000 deaths. But as the weather worsens, European nations have been under increasing pressure to step up their refugee aid.

The cooperation comes weeks after refugees have been waiting in freezing cold temperatures to walk from Serbia into Croatia.

An expected six to seven trains will cross the border each day to a new refugee registration center in Croatia carrying a total of 7,700 refugees. (Video via United Nations High Commissioner for Refugees)

This alliance highlights the lack of cooperation and conflicting opinions around Europe about how to deal with the influx.

The Serbian state commissioner for refugees told The New York Times a solution had to be figured out before winter became an even bigger issue, "You can negotiate with Croats, Macedonians, Germans and Hungarians, but you can’t negotiate with God."

While the agreement shows a willingness to cooperate, the strain of resources during the winter coupled with more refugees fleeing from the Middle East could strain this already tenuous alliance. (Video via United Nations High Commissioner for Refugees)