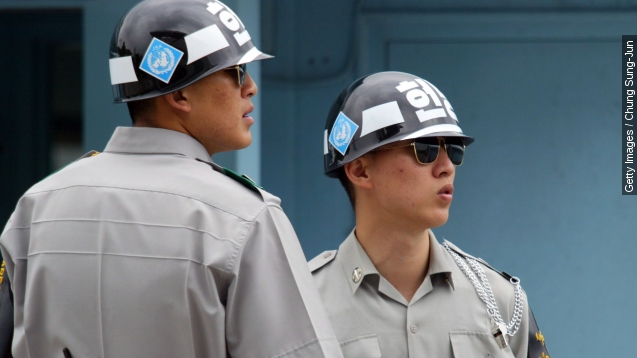 SMS
Critics Say North Korea Used DMZ Peace March As Propaganda
By Evan Thomas
By Evan Thomas
May 24, 2015
Female activists marched across the DMZ and called for North and South Korea to pursue a peace treaty, but their message might have become propaganda.
SHOW TRANSCRIPT

Critics are questioning what really got accomplished at a peace march Sunday, where American activist Gloria Steinem and a group of female peace activists crossed the demilitarized zone at the border of North and South Korea.

The group, called Women Cross DMZ, had intended to walk across the border, but ended up taking a bus after failing to secure the necessary permissions from South Korean officials.

There was backlash in South Korea, where some critics viewed the march as a propaganda opportunity for the North. Multiple outlets report representatives of Women Cross DMZ were misquoted in North Korean media as supporting the regime there. (Video via Korean Central Television)

Other critics say the activists aren't focusing on the real humanitarian issues.

"They say, 'Sure, it's a peace march, but that's just symbolic, and it doesn’t highlight enough' — exactly what you're referring to. These human rights abuses we know are happening in North Korea," said CNN's Kathy Novak.

One member of Women Cross DMZ explained to The Wall Street Journal the group must prioritize: "You can get to human rights when you have a normal situation and not a country at war."

North and South Korea have existed in a technical state of war since July 1953 when they signed the armistice agreement that ended the open fighting of the Korean War. (Video via U.S. Army Pictorial Services)

Activists, including Women Cross DMZ, are calling on the Koreas to move to a full peace treaty.

But South Korea and allies in the U.S. say no such measures would be possible while North Korea continues its nuclear weapons program. (Video via NBC)

Women Cross DMZ, meanwhile, is the first foreign group to travel through the DMZ checkpoint since a group of Russian nationals drove the route in 2014.

This video includes an image from Ms. Foundation for Women / CC BY 2.0.