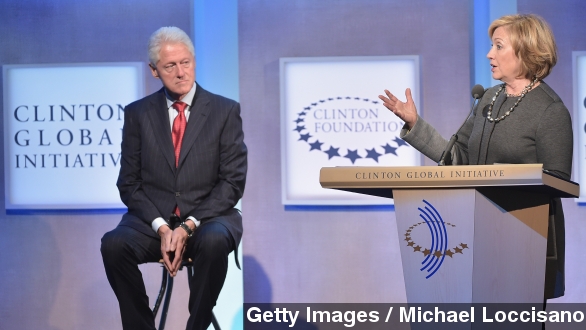 For someone who hasn't even officially announced her candidacy for president, Hillary Clinton sure is getting the scrutiny of someone who'll go for the Oval Office.

The latest is-she-fit-to-serve questions — which even members of her own party are starting to give some legitimacy — surround her ... charity work?

"This is the only medicine basically you can take if you have TB or HIV that doesn't make you really sick," Bill Clinton said in a video for the Bill, Hillary & Chelsea Clinton Foundation.

But a significant chunk of the foundation's funding comes from foreign governments or interests outside the U.S.

Last week, The Wall Street Journal reported the Clinton Foundation recently accepted donations from the United Arab Emirates, Saudi Arabia, Oman and others. And check out the Journal's headlines the next two days. The foundation went from defending the practice to reconsidering who it'll take donations from if Clinton runs for office.

"If those types of entities are giving money to the Clinton Foundation, it may not be as good as a campaign donation," Dave Levinthal of the Center for Public Integrity told Fox News. "But it is a way for them to curry favor with the Clintons and to get themselves into Clinton world."

During Hillary Clinton's time as secretary of state from 2009 to 2013, the Clinton Foundation didn't accept donations from foreign governments to avoid any appearance of a conflict of interest. (Video via U.S. Department of State)

He told The Washington Post: "If the biggest attack on Hillary's going to be that she raised too much money for her charity, okay, I'll take that. ... It went to a charity. It helped a lot of people."

But the quick promise from the Clinton Foundation to revert to old policies shows maybe the charity waited too long. Even Democrats in Iowa and New Hampshire called for the changes.

Conservatives are sure to think the foundation dragged its feet. Nearly a week after The Wall Street Journal published its first story on the issue, the front page of conservative PAC America Rising's website still features Clinton Foundation angles in its top three stories.

Assuming the foundation does make the change, however, this figures to be a drop in the larger presidential race bucket. No one has yet emerged as a serious threat for Clinton's shot at the Democratic nod, and the general election is still nearly two years away.