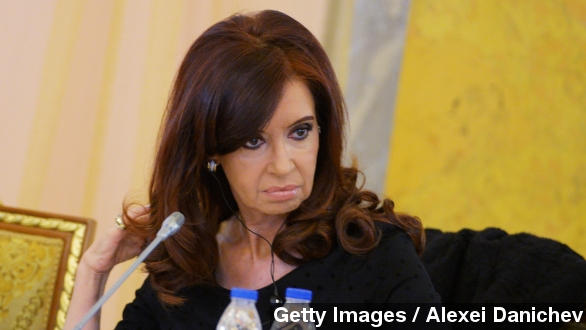 SMS
Critics Say Argentina's President Trying To Shift Blame
By Kate Grumke
By Kate Grumke
January 27, 2015
After the death of an Argentine prosecutor, the country's president wants to replace the intelligence bureau with a new federal agency.
SHOW TRANSCRIPT

Argentina's president says she plans to dissolve her country's intelligence bureau and replace it with a new federal agency. (Video via Casa Rosada)

"This government is a government absolutely committed to human rights," said Argentina's president.

President Cristina Fernandez de Kirchner is hoping the move will solve the political scandal she was wrapped up in after the death of prosecutor Alberto Nisman.

Nisman was found dead in his apartment right after he accused Fernandez of a cover-up relating to a decades-old terror attack. (Video via Al Jazeera)

Fernandez has denied these allegations, writing, "False information was 'planted' in Nisman's report."

In a very long blog post on her website, she blamed Nisman's death on rogue intelligence officials.

But many are criticizing her call for reform as an attempt to push away the blame.

Opposition leaders said the reform is meant to distract society from the central problem — impunity and dishonesty within the government.

And Argentine Sen. Ernesto Sanz said the president can't victimize herself because everything that has happened is the exclusive responsibility of her government. (Video via Youtube / ErnestoSanz)

But most recognize the need for reform. The director of the RFK Center for Justice and Human Rights wrote as much in El País that Argentina's intelligence service never transitioned to democracy, and if it's necessary to start from zero, it needs to happen.

Fernandez said she will submit her plan for the new intelligence agency by Friday. It will have to be approved by Argentina's congress.