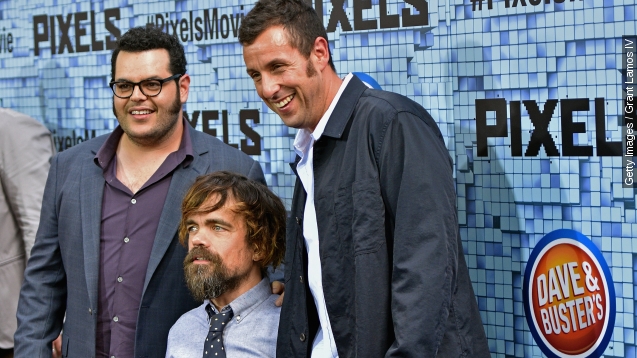 SMS
Critics Love To Hate Adam Sandler, But Audiences Don't
By Ben Lawson
By Ben Lawson
July 25, 2015
"Pixels" is a good example for Adam Sandler's career of getting lambasted by critics while still scraping by at the box office.
SHOW TRANSCRIPT

Just from looking at the horrendous reviews of Adam Sandler's latest film, "Pixels", you would think his career was in the toliet.

But despite getting completing destroyed by critics, Sandler's latest buddy comedy is estimated to take in $25 million in its opening weekend with an $80 million budget.

Yeah, it's not exactly Marvel money but "Pixels" is well on it's way to earning back its budget and then some over the course of its run in theaters.

And really thats a pretty good, if not a little too favorable, example of Sandler's career over the last decade: getting speared by critics but winding up all right at the box office.

"Grown Ups" and "Grown Ups 2" are prime examples of this.

"Is there even a plot to this thing? I'm like, no, theres not. It's them and fart jokes," What The Flick?!'s Christy Lemire said.

Those movies, like most of Sandler's other productions, took endless amounts of flak for having fifth-grade humor but still took in solid hauls at the box office. (Video via Sony Pictures Entertainment / "Grown Ups 2")

Now, "Pixels" appears to be falling into same rut.

"It's sense of humor is about as dated and obsolete as the games its referencing," an IGN critic said.

That's the general consensus, that Sandler and crew pretty much just phoned this one in and hoped the nostalgia and special effects would carry it.

It's also being lambasted for a sexist take on the very few women that actually show up in the movie. Michelle Monaghan seems like she's there just so Sandler can get the girl at the end of the day.

All this isn't to say Sandler's career is slowing down. He inked a four movie deal with Netflix and the streaming site has turned him loose on his own creative wiles. (Video via TBS / "Conan")

"Ridiculous 6," the first of those films, is still in production and already manged to kick up some controversy when it was accused of racist portrayals of Native Americans.

It will be interesting to see how this Netflix deal goes. As a video streamer, it doesn't need to care about box office numbers. So who knows how things will go down if "Ridiculous 6" gets as little love as Sandler's other projects.