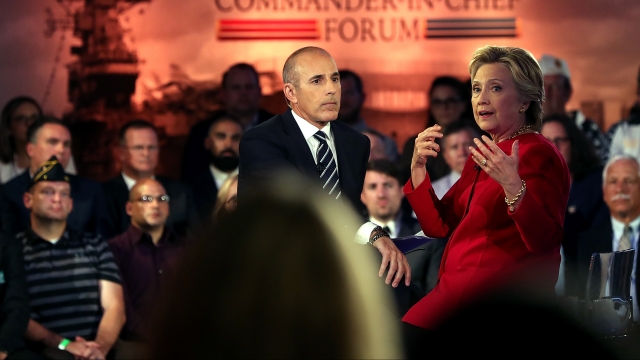 SMS
No One Was Happy With Matt Lauer At The Commander-In-Chief Forum
By Briana Koeneman
By Briana Koeneman
September 8, 2016
Critics across the political spectrum and many journalists criticized how Lauer moderated the event.
SHOW TRANSCRIPT

Those are just a few of the harsh words used to describe how Matt Lauer moderated NBC's first Commander-in-Chief Forum with Hillary Clinton and Donald Trump.

Critics from all over the political spectrum and many journalists blasted the "Today" show host for being out of his element during the broadcast.

Lauer was criticized for pretty much everything he did, from his questions to his lack of follow-ups to not fact-checking either candidate.

Clinton supporters were livid that he spent a long time asking her about her emails and didn't challenge Trump when the Republican nominee falsely claimed he opposed the Iraq War.

Trump says he was against invading Iraq from the very beginning, citing an Esquire article that was published the year after the war actually began.

That's probably not the kind of feedback Lauer was hoping for.

But as The New York Times points out, other moderators could run into similar issues when the formal presidential debates begin later this month, especially with Trump.

"Mr. Trump, with his Houdini-like ability to squirm out of direct answers, is a particularly tough subject for interviewers, who will be forced to determine on the fly when to interrupt with a prime-time fact-check," wrote The New York Times' Michael M. Grynbaum.