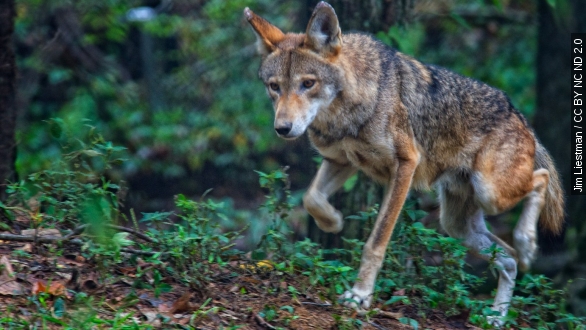 This is a coywolf — a coyote-wolf hybrid that has developed in North America.

They happen when coyotes breed with any of three types of wolf: the grey wolf, the eastern wolf and the red wolf. (Video via PBS)

Coywolves have been reported throughout the eastern United States and southeastern Canada.

In urban areas, the hybrids can pose a threat to small pets.

"Mississauga animal services believe this is the third time this year coywolves have attacked dogs in the city," CityNews Toronto's Tracy Tong said.

A witness whose dog was killed said, "I tried to get him to drop the dog even after I knew he wasn't alive anymore."

But in the southeastern U.S., the animals are posing an existential threat to a critically endangered species — the red wolf. And humans might be to blame. (Video via Point Defiance Zoo & Aquarium)

The red wolf was declared extinct in the wild in 1980 but has since been reintroduced into the wild in North Carolina. (Video via The State)

One man asked, "Who wants to see the red wolf gone from their land, by show of hands?"

Some wolves have been shot. Researchers say when that happens, the wolf's mate sometimes then breeds with a coyote, diluting the species.

The U.S. Fish and Wildlife Service has been trying to sterilize hybrids to preserve true wolves.

It's not clear if it will get the chance, though. In January, the North Carolina Wildlife Resources Commission recommended the Wildlife Service end the recovery program, citing hybridization. (Video via Western North Carolina Nature Center)

This video includes an image from Mech et al and music from Kevin MacLeod / CC BY 3.0.