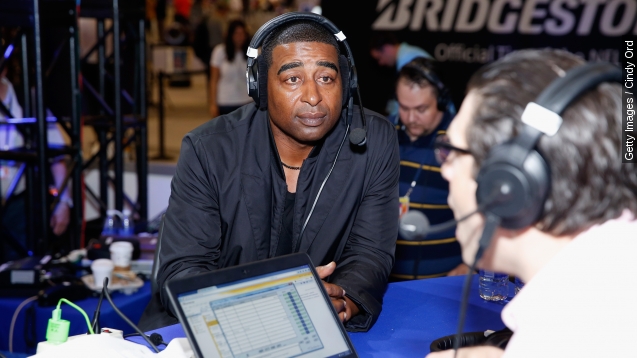 SMS
Cris Carter Facing Major Backlash For His 'Fall Guy' Advice
By Grant Suneson
By Grant Suneson
August 26, 2015
Cris Carter is under fire for comments he made at the 2014 NFC Rookie Symposium, advising players to blame someone else if they're ever arrested.
SHOW TRANSCRIPT

Hall of Fame wide receiver Cris Carter is under fire for comments he made at the 2014 NFC Rookie Symposium, advising players to blame someone else if they’re ever arrested.

“Just in case y’all not gonna decide to do the right thing, if y’all got a crew, you gotta have a fall guy in the crew,” Carter advised the rookies.

Carter’s comments came to light after an ESPN article about Chris Borland, who retired after his rookie season, said he got bad vibes from the way the NFL operated.

Sports Illustrated’s Robert Klemko tweeted he was asked to omit those comments for a story he did on the symposium, revealing an NFL employee “looked my way and said, ‘That can't go in the story.'"

Ironically, the year-old video was still available on the NFL’s website, until it was taken down in response to the backlash.

Now that the comments are public knowledge, the former Minnesota player apologized for what he said. “I would never tell young people to break the law to avoid prosecution. It was bad advice. I really regret my words.” But many in the media aren’t buying it.

Chip Scoggins of the Minneapolis Star Tribune wrote, “The NFL never pretends to operate in the same manner as other corporations, but Carter’s flapdoodle and the league’s weird decision to post that video is shameful on so many levels.”

Former NFL player Plaxico Burress blasted Carter for not doing his job in helping new players stay on the straight and narrow. Burress, of course, did jail time after accidentally shooting himself at a nightclub in 2008.

You might be asking yourself, at the end of the day, isn’t it ultimately the player’s responsibility to stay out of trouble? It is, but the league also has an obligation to help their players, especially in light of all the heat on commissioner Roger Goodell.

He was widely ripped for his handling of the Ray Rice case, in which the NFL claimed it had no knowledge of Rice’s assault on his then-fiancée. An independent arbiter later ruled the league knew about the situation.

It doesn’t seem like the NFL is really doing all that much to curb arrests when a former player wearing his Hall of Fame jacket tells rookies how to skirt the rules.

In fact, three players in attendance at that speech were arrested in the following year for charges including marijuana possession, DUI and animal cruelty. Warren Sapp, who shared the stage with Carter, was arrested in 2015 two separate times for soliciting a prostitute and domestic violence.

In his apology, Carter mentioned he’d spoken at 15 to 20 other events, so there’s no telling how many young players heard his dubious advice.