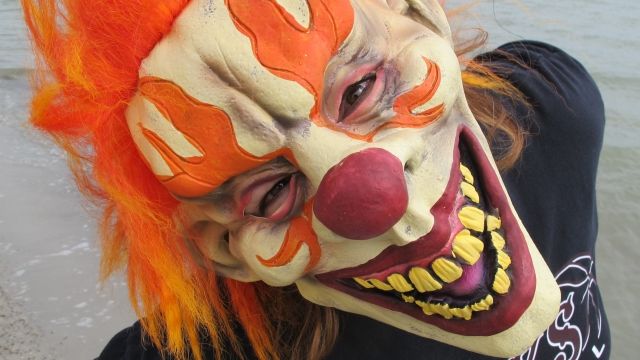 SMS
Creepy Clowns In Germany Might Get Jail Time
By Carter Woodiel
By Carter Woodiel
October 29, 2016
A German official says people wearing clown costumes in the country could spend some time behind bars — potentially up to a year.
SHOW TRANSCRIPT

Jail time for dressing up as a clown? In Germany, that's a possibility.

You've probably heard a lot about creepy clown sightings recently: people getting dressed in colorful costumes and scaring people — or worse. Germany isn't exempt from the craze, and the government says it's cracking down just in time for Halloween.

Authorities there say they're taking a zero-tolerance policy on those in clown outfits creeping people out, with one justice minister suggesting a yearlong jail sentence.

The move comes on the heels of some very real crimes in Germany. One clown attacked and injured a 19-year-old with a baseball bat. In a different incident, a woman says a clown frightened her with a chainsaw. And those are just a few cases.

German retailers have even pulled clown masks from shelves to curb the trend.

Authorities say those in Germany who dress up in clown garb could face punishment whether or not they commit a crime in costume. The country's Justice Minister Thomas Kutschaty says just scaring someone in a clown costume qualifies as a "criminal threat."

Germany isn't alone in its clown panic. Target recently pulled clown masks from its shelves, and McDonald's is cutting back on local appearances featuring its famous clown mascot, Ronald McDonald.

Of course, with Halloween quickly approaching, German officials fear these incidents could increase.

So if you were planning to be a clown at that Halloween party, maybe go as an astronaut, or a police officer, or ... really anything else.