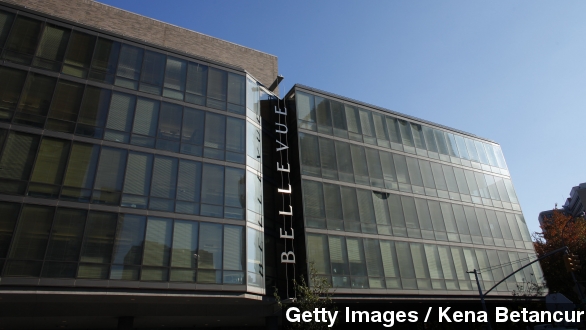 SMS
Craig Spencer, Last U.S. Ebola Patient, To Be Released
By Matt Picht
By Matt Picht
November 10, 2014
Dr. Craig Spencer, who contracted Ebola in New York after combatting the disease in West Africa, will be released from the hospital virus-free.
SHOW TRANSCRIPT

Officials at New York City's Bellevue Hospital announced Monday that Dr. Craig Spencer, New York City's first and so far only Ebola case, is about to be discharged with a clean bill of health.

Spencer first contracted Ebola while battling the deadly disease in Guinea with the medical nonprofit Doctors Without Borders. He was rushed to Bellevue on Oct. 23 with a fever of 100.3, where he was diagnosed with Ebola and placed in isolation. (Video via New York Post)

As WPIX notes, Spencer's activities before the diagnosis, which included a 3-mile jog and a night of bowling, threw the city into a mini-panic as officials scrambled to try and track down everyone who might have come into contact with him.

WPIX: "There was panic of course for a while after word got out that he had gone bowling, went for a run, rode the subway, you probably remember all that. But 19 days later, it seems like he's getting the all clear to return home symptom-free."

A few days before his release, multiple outlets reported Spencer was feeling healthy enough to ride an exercise bike and play his banjo in isolation. Which was great news ... for most people.

Spencer's impending release will also mark another big milestone: the U.S. will no longer have a single active case of Ebola since the first patient was diagnosed on September 30.

Dallas, the city which handled that first case, was declared Ebola-free three days ago after the last person to be exposed passed the virus's incubation period without incident.

New York isn't quite in the clear yet. The New York Times reports Spencer's fiancee is still under quarantine. But so far, no new cases have manifested, and the incubation period is almost up for the city.

But even if the U.S. is free from Ebola now, that doesn't mean the risk is over. After all, the virus is still rampaging through West Africa, where it's killed around 5,000 people so far according to World Health Organization estimates. (Video via CBS)

A writer for Slate points out Spencer's release means eight of the nine Ebola patients treated in the U.S. have fully recovered, "a statistic that underlines the potential to significantly improve treatment outcomes in West Africa, where patients often die because medical facilities are understaffed and lack basic equipment."

Among the treatments given to Spencer during his recovery were an experimental drug and a blood transfusion from a previous Ebola survivor, both methods believed to be effective in treating the disease.