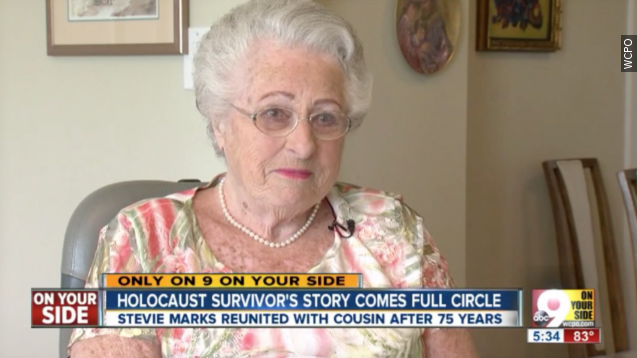 SMS
Woman Who Escaped Holocaust Reunited With Cousin
By Becca Dunn
By Becca Dunn
July 21, 2015
Stevie Marks, a woman who fled the Nazis and escaped war-torn Europe to come to the U.S., has been reunited with her cousin.
SHOW TRANSCRIPT

That was Stevie Marks — a woman who spent years fleeing the Nazis — talking about reuniting with her cousin after losing touch. And it all happened by chance.

"I said 15th floor. Well, that's the apartment they suggested for me. They said, 'It's right around the corner from Maybel.' So it was amazing," said Marks.

So, after years apart, the two ended up in the same senior living residence just around the corner from each other. And to truly appreciate this happenstance, it's important to know what Marks went through to get to this point.

It all started in 1939 when Marks and her family traveled over 7,000 miles to escape the Nazis. They went from Poland to Brussels to Paris and then Portugal.

And these travels weren't easy. She and her family were in constant hiding, saw atrocities at the hands of the Nazis and scrounged for food.

In 1941, Marks made her way to her relatives in the U.S., one being her cousin Maybel Cohen. The two lost touch over the years.

Marks' story has touched the hearts of many, including ABC, which took a closer look at her "frightening escape."

The Kenwood by Senior Star, the residence Marks and Maybel live in, puts Marks' journey into perspective: "She now has a new story to tell."