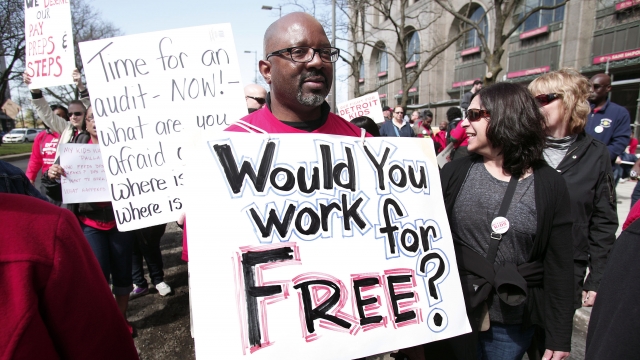 An eight-month court battle ended in Detroit teachers' favor, ruling their use of "sickouts" was legal.

A local union encouraged teachers at public schools to call in sick on multiple occasions. The move was in response to what they argued were poor working conditions.

One issue was the physical state of several Detroit-area schools. Some teachers said ceiling tiles were falling down and mold was growing, making schools unsafe for both teachers and students.

Teachers were also worried they wouldn't get paid the full amount they were entitled to due to the school district's debt crisis.

But others criticized the sickouts as selfish for disrupting students' educations and forcing many parents to stay home to take care of their children.

On one day, all but three of the Detroit-area's 97 schools were closed due to sickouts.

It's actually illegal for public school workers in Michigan to go on strike.

But the court ruled Friday the sickouts were politically motivated, and because of that, they were protected by the First Amendment.

One policy stemming from the sickouts was the creation of a new district in July. This allowed the Detroit Public School District to focus on paying off debt and opened up more funds to guarantee teachers' pay.