Could Singapore Beat The US To Full-On Drone Delivery? 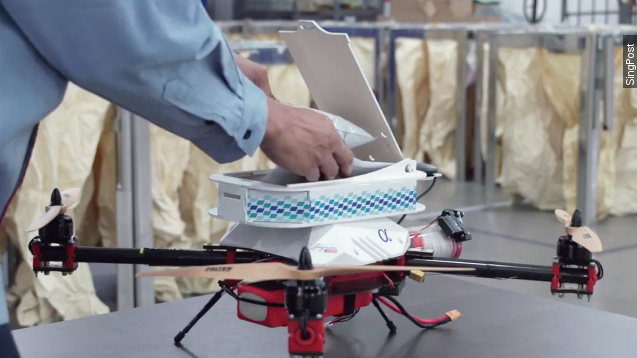 SMS
Could Singapore Beat The US To Full-On Drone Delivery?
By Mikah Sargent
By Mikah Sargent
October 8, 2015
Singapore's national postal service said its test drone made a successful delivery. Meanwhile, the U.S. is twiddling its thumbs over regulations.
SHOW TRANSCRIPT

How would you feel if a drone showed up at your doorstep with a birthday card from your grandma? (Video via Steve Ryan / CC BY 3.0)

That's a scenario that could soon become reality in Singapore, where the country's national postal service has started testing drone delivery. (Video via Ryan Favro / CC BY 3.0)

Singapore Post, working together with the Infocomm Development Authority of Singapore, or IDA, delivered a T-shirt and letter to a destination more than a mile away from its origin.

Pretty cool, right? But the scenario carries its own security questions. What if grandma had sent you a T-shirt and letter, but the drone touched down and someone else grabbed your gifts from granny?

Well, the postal service says it's got an app for that.

"We have developed a customized solution app, equipped with security features and authentication functions to ensure that mail and packages are delivered to the intended recipient," Leong said.

At this rate, we're beginning to wonder if Singapore is ahead of the game with drone delivery. SingPost says it worked closely with Singapore's Ministry of Transport to ensure the safety of all involved. Meanwhile the U.S. is still twiddling its thumbs, waiting for official drone regulations from the Federal Aviation Administration. (Video via Drone Footage / CC BY 3.0)

Which is keeping companies like Amazon and even the United States Postal Service from delivering packages via unmanned aerial vehicles. (Video via Amazon)

We're not expected to see official drone regulations until spring 2016. Meanwhile, the rest of the world is happily receiving their granny gifts from super-cool flying vehicles. I'm not bitter.