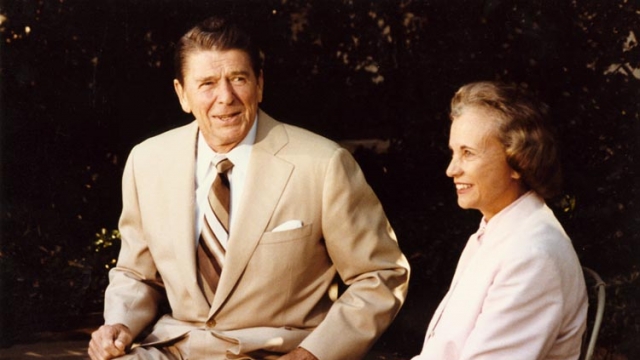 SMS
Could Sandra Day O'Connor Fill Antonin Scalia's Supreme Court Vacancy?
By Matt Moreno
By Matt Moreno
February 18, 2016
An op-ed suggests that O'Connor would be a good replacement because of her age and her conservative-leaning history, but she has other thoughts.
SHOW TRANSCRIPT

It's been more than a decade since Sandra Day O'Connor's retirement from the Supreme Court, but there's talk the 85-year-old former justice could fill the void left by the late Justice Antonin Scalia.

An op-ed in The Baltimore Sun laid out the case for appointing O'Connor, including her age and political history.

"Republican leaders routinely tout President Reagan as an icon; a vote against confirming Justice O'Connor would be an admission that the patron saint of the modern Republican Party wasn't infallible," the writers penned.

The conservative-leaning O'Connor — the first female Supreme Court justice — was nominated to the court by Ronald Reagan in 1981. Though that doesn't mean she falls fully in line with modern Republicans.

Senate Republicans say the next president, not Obama, should appoint the next justice.

"One more liberal justice and we will see our fundamental rights taken away," GOP presidential candidate Ted Cruz said in a Fox News interview.

But in an exclusive interview with KSAZ, O'Connor disagreed.

"I don't agree. I think we need somebody there, now, to do the job. Let's get on with it," O'Connor told KSAZ.

In the same interview, O'Connor said the idea of Obama appointing her to serve a few years wasn't logical.

This video includes clips from images from the National Portrait Gallery and images from Getty Images, Library of Congress and Ronald Reagan Presidential Library.