Could Rape Claim Against Bill Clinton Impact His Wife's Campaign? 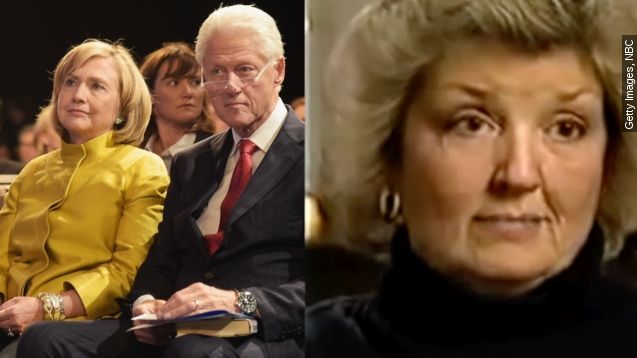 The question of whether Bill Clinton's past will be a big part of his wife's second presidential run seems to have been answered.

Juanita Broaddrick, a woman who first publicly accused President Clinton of rape in the '90s, has spoken out on social media. In a series of tweets, Broaddrick says, "Clinton, Arkansas attorney general raped me and Hillary tried to silence me." (Video via Fox News)

Broaddrick worked on Bill Clinton's gubernatorial campaign and alleges Clinton raped her in a hotel room in 1978.

"He starts to bite on my top lip as I try to pull away from him, and then he forces me down on the bed," Broaddrick said in a 1999 interview.

Broaddrick says Hillary Clinton walked up to her weeks later at a campaign event and thanked her for what she had done for Clinton while squeezing her hand tightly. Broaddrick took that to mean Hillary Clinton knew about the alleged rape and was thanking her for keeping quiet. (Video via KATV)

Broaddrick sued the Clinton White House in 1999 for documents she said the White House had on her in an attempt to attack her credibility. That suit was dismissed in 2000 for a lack of "factual support." (Video via C-SPAN)

Hillary Clinton has recently faced questions on the campaign trail about Broaddrick and other women who claim her husband sexually assaulted them on multiple occasions.

"Well, I would say that everybody should be believed at first until they are disbelieved on evidence," the Democratic front-runner answered.

Neither of the Clintons have directly addressed Broaddrick's allegations. (Video via Hillary for America)