Could This Ballot Change Improve Our Political Campaigns? 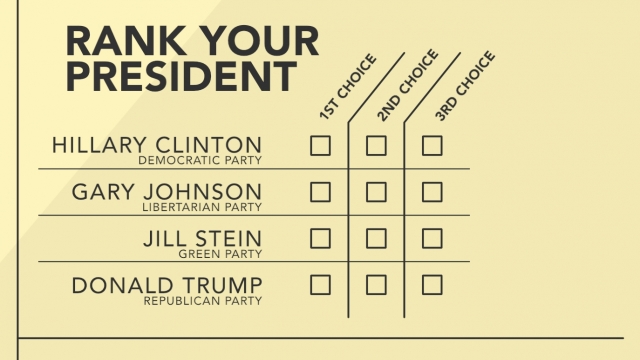 SMS
Could This Ballot Change Improve Our Political Campaigns?
By Kate Grumke
By Kate Grumke
September 15, 2016
It's called ranked-choice voting, and there are some interesting arguments in favor of it.
SHOW TRANSCRIPT

We talked to Michelle Whittaker of FairVote about ranked-choice voting, a ballot system that allows voters to rank their choices of candidates for office, rather than just selecting one. For example, candidates would rank their choice for president in order of their preference. In most elections, the actual votes would be counted just like they would in elections where just one candidate is selected.

But Whittaker explained why this type of ballot could change some of the things we like least about our presidential process.

"It gives more choices to the voter. And it's a great system for really having voters express their full opinion and having campaigns really reach beyond just their limited bases."

"You're not going to see as many negative campaigns because there's no benefit in a campaign going negative on a candidate because that's again going to impact their chances of getting second. Campaigns run not only for those first choices but to be second choices."

The system is already being used in local elections across the country, including in Minneapolis and San Francisco. And some states use the system for military and overseas voters to ensure their votes can be counted in case of a runoff.

"And it changes the dynamic of the conversation. If we had this, where for our presidential election, independents, third-party candidates could really be part of the full conversation, I think we would see more of a shift in terms of how other candidates, major-party candidates, would discuss the issues as well. We're not looking at it as a zero-sum game where only we need to win as Democrats or we need to win as Republicans. It's about we need the best ideas to win, we need the best ideas to come forward and be what moves our country forward."