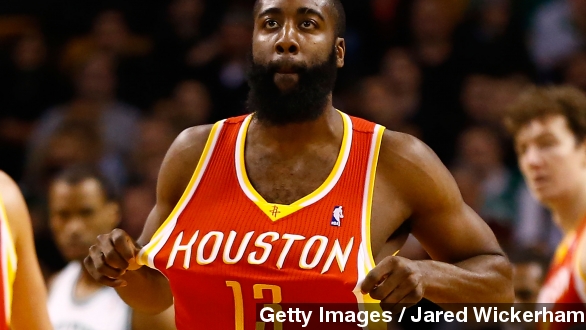 Thanks to the NBA's new nine-year, $24-billion media deal, ads on jerseys could be coming sooner rather than later.

Sports Business Journal reports ads on jerseys were part of that giant deal, though the specific details of it have not been hammered out quite yet.

The outlet writes, "Under the new TV deals, NBA teams maintain the rights to sell the jersey advertising, which has an estimated value ranging from around $800,000 for small-market teams like the Memphis Grizzlies to more than $10 million for large-market teams like the Los Angeles Lakers."

It'd be an unprecedented move if it goes into place as none of the other major American sports have taken that step.

If you look at the NFL and MLB, you won't see any ads on their jerseys, aside from maybe logos by the jersey manufacturers or ads on the playing field walls.

TSN reported in September that the NHL passed on a proposal to put ads on jerseys, though it would generate an estimated $120 million for the league. The outlet quotes an unnamed source saying, "[NHL Commissioner] Gary (Bettman) and owners like the money, but they don't want to be first out of the box with this in North America. They'll wait for the NBA or baseball to do it and then be second or third."

NASCAR is likely the most prominent sports organization with ads-on-athletes deals. Their drivers and cars very visibly decked out in decals. For primary sponsors, those who cover a whole car and driver with their product logos, Adweek reports it costs up to $35 million for a single car per Nascar Sprint Cup Series.

Though this move by the NBA doesn't come as a complete shock.

Earlier this year, the NBA announced it was moving its official logo from the front to the back of the jersey. An unnamed league official quoted by ESPN said it was a "stylistic move". (Video via Charlotte Observer)

Stylistic or not, it added to the speculation that the NBA could be moving toward corporate logo ads on the front — something that appears to be in the process of happening. (Via Time, Mashable, New York Post)

The NBA has not confirmed when, or if, ads on jerseys will be a reality.