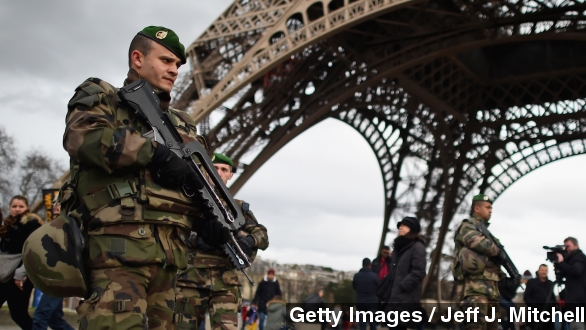 SMS
Could France Adopt Legislation Similar To Patriot Act?
By Ben Lawson
By Ben Lawson
January 12, 2015
In light of recent terrorist attacks, analysts are questioning whether France could pass its own version of the U.S.'s controversial Patriot Act.
SHOW TRANSCRIPT

Following terror attacks in France that left 17 people dead, the country has mobilized 10,000 troops to guard against any future violence. Of course, there's fear of another attack, but now there's also fear of a growing police state in France.

After 9/11, American officials ushered in the USA Patriot Act, which allowed for roving wiretaps and the indefinite detention of immigrants.

Now some outlets are predicting there will be calls for similar law-enforcement powers to what is allotted in the Patriot Act to be implemented in France.

That's because there does seem to be a missed opportunity to prevent the attacks from authorities.

The men behind the attack on Charlie Hebdo, Said and Cherif Kouachi, were already on U.K. and U.S. terror watch lists and Amedy Coulibaly, the man who killed four hostages at Kosher grocery store and a policewoman the day before, had a previous conviction for planning to free a known militant from prison.

But if French lawmakers do decide to push similar legislation, it might prove a bit challenging.

The Patriot Act remains controversial in the U.S. nearly 14 years after being signed into law, and similar enforcements could draw even harsher criticism in France because the U.S. legislation is already well-known and hotly debated. (Video via C-SPAN)

RFI quotes France's far-right Front National party leader Marine Le Pen, "This type of measure uses the danger of terrorism as an excuse but in reality it is aimed at restricting our freedom of expression and our general liberty."

Though, for what it's worth, no actual legislation has been put forward yet. It'll be up to France's ruling Socialist party to decide next steps.