Could Deez Nuts Be Our Next President? (Hint: No) 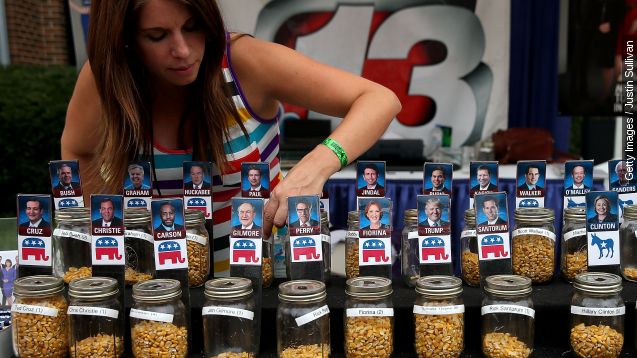 SMS
Could Deez Nuts Be Our Next President? (Hint: No)
By Ben Levin
By Ben Levin
August 22, 2015
A prank presidential candidate called "Deez Nuts" is picking up respectable numbers against Hillary Clinton and Donald Trump. How are people reacting?
SHOW TRANSCRIPT

"Presidential candidate, and I mean I’m not making this part up — this guy, this candidate, this name is polling among the other major contenders," said a CBS anchor.

Deez Nuts is — sorry, folks — not real, but instead a sophomoric joke candidate dreamed up by Brady Olson, who is literally a high school sophomore from Wallingford, Iowa.

But that didn't stop Public Policy Polling from actually gauging Mr. Nuts' support. In Iowa he's picking up 7 percent, he's at 8 percent in Minnesota and in North Carolina he's pulling down a whopping 9 percent when voters were asked if they'd vote for Clinton, Trump or Nuts.

In North Carolina — now considered a relative Deez Nuts stronghold — 6 percent held favorable opinions of Deez Nuts, 13 percent disapprove, and 81 percent are "not sure," which is to say that 81 percent of North Carolinians probably didn't get the joke.

Also lacking humor were newscasters, who appeared confused by the whole thing. Deadspin posted a supercut of all those wonderful newscasts featuring the new candidate.

Regardless, he's definitely winning the Internet primary. According to Google, "Deez Nuts" was a more popular search term this week than "Hillary Clinton."

But enough of the popularity contest. What does Deez Nuts stand for?

His platform is a mix of liberal and conservative: Mr. Nuts believes in deporting unauthorized immigrants, but also supports the Iran nuclear deal.

Yet, despite his surge into the high single-digits, obstacles remain. The phrase was coined by Dr. Dre in 1992, which means Mr. Nuts is only 23 years old. Under the U.S. Constitution, the president must be at least 35. (Video via KRRL)

Between the legal issues and the fact that he's, well, a prank, don't count on having to say President Nuts anytime soon. But with five months to go until the Iowa caucuses, it's a good reminder that while electing a president is serious business, some Americans aren't taking it too seriously quite yet.

This video includes images from Getty Images and National Archives and Records Administration.