Could Americans Detained In Iran Affect The Nuclear Deal? 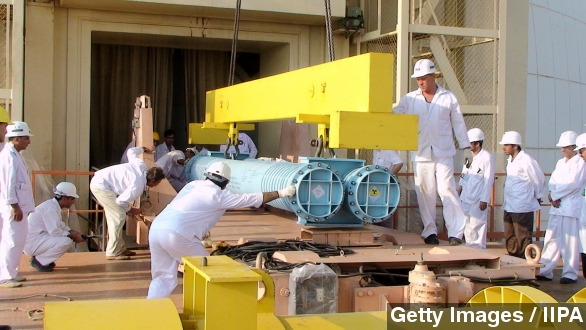 SMS
Could Americans Detained In Iran Affect The Nuclear Deal?
By Cliff Judy
By Cliff Judy
March 21, 2015
While the world watches the U.S.-Iran nuclear negotiations, a handful of Americans in Iranian custody are caught in the middle.
SHOW TRANSCRIPT

"We know that a comprehensive solution is not going to happen if Iran's leaders are not willing to making hard choices," U.S. Secretary of State John Kerry said. (Video via C-SPAN)

While the U.S. negotiates a nuclear deal with Iran that certainly has the world's attention, a handful of Americans are caught in the middle — believed to be held in Iranian prisons. Jason Rezaian, for instance — The Washington Post's bureau chief in Tehran — has been behind bars in Iran since this past summer with the crimes he's charged with still unspecified.

Iran and the coalition known as P5+1 have just 10 days until the March 31 deadline to have the framework of a nuclear agreement in place.

"This year, we have the best opportunity in decades to pursue a different future between our countries," President Barack Obama said on Thursday.

But only a day later, The White House released this statement calling on Iran to release Rezaian, pastor Saeed Abedini and former Marine Amir Hekmati.

Obama also called on Iran to help find Robert Levinson, a contractor whose family has acknowledged he was working for the CIA when he disappeared in Iran eight years ago. (Video via Help Bob Levinson)

Iran's handling of each of these cases has varied and it's repeatedly said it doesn't even have Levinson, but all four of the Americans would presumably be considered by Iran as participating in subversive, anti-Islamic Republic activity. Rezaian and his employer certainly never held back criticism of the country. (Video via Press TV)

Iran's reputation for oppressing and even jailing Western journalists is bona fide with Reporters Without Borders listing 17 journalists currently imprisoned there.

The press watchdog group wrote in December it was "very worried" to learn of the charges against Rezaian and considered him a pawn in the U.S.-Iran nuclear negotiations.

But how much the Americans in Iranian custody will play into the nuclear deal is debatable. After all, the U.S. is the main negotiator in P5+1, but still just one country among a group of U.K., France, Russia, China and Germany.

Saturday morning, Iranian President Hassan Rouhani told reporters a deal was close, but put the onus of the last negotiation points on the other side of the table. Kerry confirmed as much Saturday saying both sides have made significant progress, though he didn't specify who needed to make concessions to get a deal done.