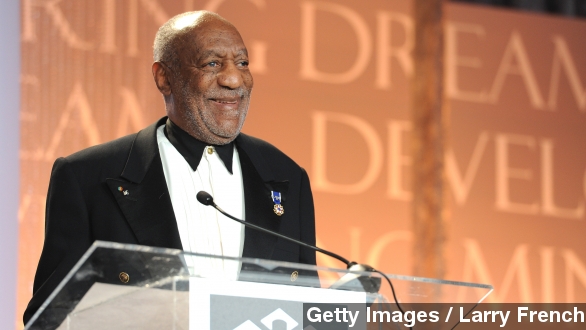 Bill Cosby is at the center of a recent social media fail after an attempt to engage fans gave critics a high-profile way to revive years-old sexual assault allegations.

Cosby, or somebody running his Twitter account, tweeted a link Monday to a meme generator on the comedian's website. The generator allowed users to caption pictures of Cosby using the familiar white-block text font.

The result: a hashtag — #CosbyMeme — and lots of snarky posts about rape and sexual assault allegations against Cosby. The initial tweet has since been deleted and the meme generator is nowhere to be found on his website.

The captions refer to accusations against the 77-year-old comedian that have circulated over the last decade.

They're most likely on people's minds now because of an Oct. 21 stand-up bit by comedian Hannibal Buress:

A week after that bit, former actress and model Barbara Bowman claimed she was drugged and raped by a 47-year-old Cosby when she was only 17. In an exclusive interview with the Daily Mail, Bowman said, "I thank Hannibal Burress [sic] for speaking out over and over again. ... He is standing up for me and the other women who are too afraid to speak out."

But Bowman was hardly the first woman to accuse Cosby of sexual assault. Andrea Constand sued Cosby in 2005, claiming he molested her in his Pennsylvania home years prior. Thirteen other women with similar allegations agreed to testify if the lawsuit went to court, but Cosby settled for an undisclosed amount in 2006.

Between 2006 and 2014, things died down for Cosby and he even received at least two awards for his decades-long career as an entertainer.

In fact, in a 2007 Pew Research Center survey on how blacks view progress in their own communities, 85 percent of the 1,007 black respondents described Cosby as a "good influence" — only a year after he settled a sexual assault lawsuit, Cosby rated higher than then-Senator Obama.

I mean, the image of Cosby as the all-American TV dad — who happens to be black — is memorable... and the only image a lot of people would probably like to remember. (Video via NBC / "The Cosby Show")

But at least one Flavorwire writer thinks Cosby's allegations will be harder to forget this time, saying, "One stand-up clip in the Internet era can go far, as this story proves. ... A story like this no longer withers as it once did."

Cosby's website shows he has several upcoming events and is scheduled to appear in an NBC sitcom in the near future.