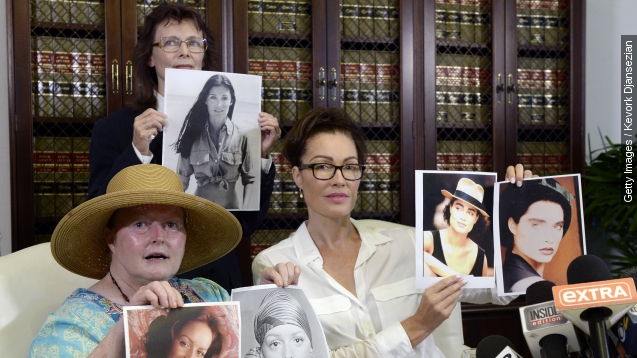 Hughes says she met Cosby in the '70s while working as an American Airlines flight attendant. She claims he invited her to lunch in Los Angeles when they landed, but when they went to her hotel room to change clothes, Cosby ordered champagne and appetizers.

Hughes said Cosby poured the champagne. Hours later, she recalled waking up with her clothes across the room and evidence of rape, including a mess indicating Cosby didn't use a condom. By then, she said, Cosby had already left.

She says she encountered him a year later on another flight and confronted him. She claims he "turned pale" and asked if she had reported the incident to the police.

Whitedeer says Cosby wanted to interview her in "The Cosby Show"'s director's office, at which point she says he forced her to perform oral sex.

"His attack was fast, with surgical precision, and surprise was on his side. ... I was bordering between vomiting and passing out," she and her lawyer, Gloria Allred, read from a written statement.

In July, "The Cosby Show" producer, Tom Werner, said he hoped the legacy and impact of the show would stay intact because it was a popular family show. That legacy could be called into question with these new reports of two more alleged attacks on set.

Tirl says Cosby tried to make a pass at her in his dressing room on the set of "The Cosby Show."

Tirl said she felt dominated and tried to hold Cosby off by telling him she thought of him as one of his most iconic characters, Fat Albert.

He reportedly said, "Don’t say that, they all say that!" Tiri says she left before things escalated.

Cosby has not been charged for any of the allegations, though he has had many career setbacks as a result. His lawyer, Martin Singer, continues to deny the claims.