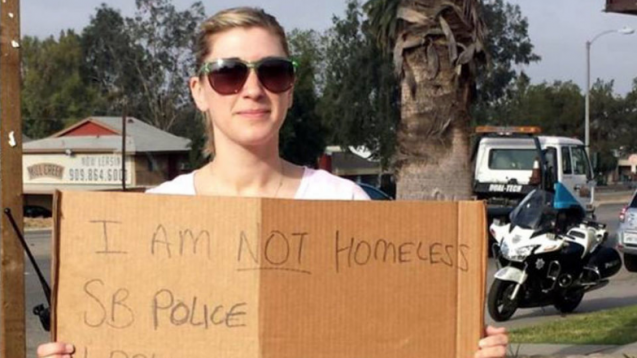 For many in San Bernardino, California, it might have paid off to read the panhandlers' signs.

Or, fake panhandlers' signs. The San Bernardino Police Department went undercover and dressed as panhandlers to catch distracted drivers. Four officers stood on freeway off ramps with signs that read: "I am not homeless. SB Police. Looking for seat belt/cellphone violations."

According to a press release from the police department, the purpose of this undercover enforcement was to "bring awareness to the importance of seat belt usage and distracted driving."

The press release reports 50 vehicles were stopped: 33 citations were issued for cell phone violations, 15 tickets were given to drivers not buckled up, and five vehicles were impounded. (Video via OregonLive)

The San Bernardino Police Department isn't the first to do this.

And he was successful as well, issuing 11 tickets in just one hour. Taylor told Canadian news outlet Info News, "“It is very interesting when most people looked (my) way and thought I was panhandling, (they) quickly looked away so that there was no eye contact."

We want to hear what you think about this tricky tactic. Is it fair for police to dress as panhandlers to catch distracted drivers? Tweet us @NewsyVideos.