Controversy Over Yet Another Confederate Artifact 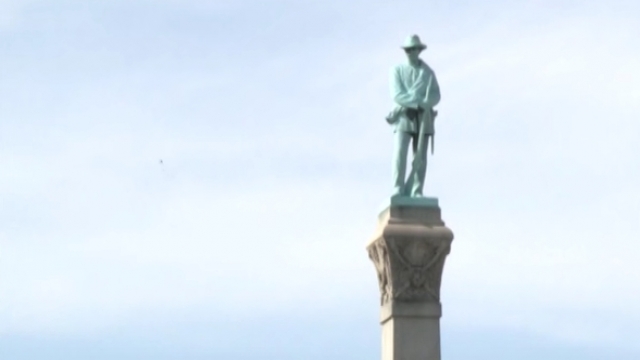 A controversial Confederate monument will stay on the University of Louisville's campus — for now.

"We see the arrogance and hubris of a powerful, politically correct elite bent on irreparably harming our community and erasing history," Everett Corley told press.

On Monday, a local judge approved a restraining order filed by Republican congressional hopeful Everett Corley that prevents the city from removing it.

Recent action to remove the monument was spearheaded by Louisville's mayor and the university's president. The monument was gifted to the city in 1895 and was intended to commemorate veterans who fought for the Confederacy.

But many categorize Kentucky as a border state in the Civil War — not part of the Union or the Confederacy — and some say that's one reason the monument should go.

"The Confederacy was a group of traitors who lost the war. Why are you going to memorialize it here? If somebody else wants the statue, then certainly go take it, but it has no place at a modern university," a professor at the University of Louisville told WHAS.

But Louisville's mayor and the university's president pointed out the goal isn't to destroy the monument. Instead, they want to move it to a more "appropriate" location, like a Confederate cemetary.

"It was a complicated question in 1895, with Union and Confederate veterans along with freed slaves and their families living in this city, passing each other on the same streets every day. ... I recognize that some people say this monument should stay here because it is part of history, but I also appreciate that we can make our own history," Louisville's mayor said during a public announcement.

The Courier Journal reports a hearing is set for later in the week to consider a full, permanent injunction on the memorial's removal.

This video includes a clip from the University of Louisville.