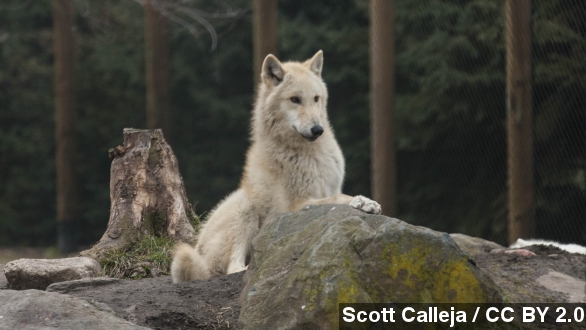 The first of the new year marked the start of Idaho's second annual wolf-kill derby. The event, called the Predator Hunting Contest and Fur Rendezvous, has one main goal: kill as many wolves and coyotes as possible. (Video via National Geographic)

The private group hosting the competition, Idaho for Wildlife, will award a $1,000 prize for most wolves and most coyotes killed, as well as separate prizes for participants aged 10-13 and 14-17. Event organizers also say fur traders will be in attendance to buy fur for some cold, hard cash.

The competition caused a lot of controversy during its inaugural year in 2013 and was temporarily put on Idaho's back burner this past November.

The U.S. Bureau of Land Management originally gave Idaho for Wildlife 3 million acres of BLM land for the event but revoked the special permit in November after many wildlife advocacy groups threatened to file a lawsuit against it. The loss of the permit cut the event's hunting area in half.

Ranchers have long shot wolves in an effort to protect their livestock, according to National Geographic. And in Idaho, concerns about wolves killing livestock and wildlife led to the establishment of a Wolf Depredation Control Board that oversees wolf control efforts.

But how effective are events like Idaho's private derby? One study suggests killing wolves isn't an effective way of protecting livestock.

Researchers out of Washington State University conducted a 25-year study that examined the effects of wolf-killing on livestock attacks.

If killing more wolves increases the livestock killed, why continue with the Idaho competition?

Although Idaho for Wildlife's website was down as of Friday afternoon, Boise Weekly quotes the site as saying the group's goal is "to fight against all legal and legislative attempts by the animal rights and anti-gun organizations who are attempting to take away our rights and freedoms under the Constitution of the United States of America."

The derby is taking place on U.S. Forest Service and private land until Jan. 4. The lawsuit against the BLM is currently pending.