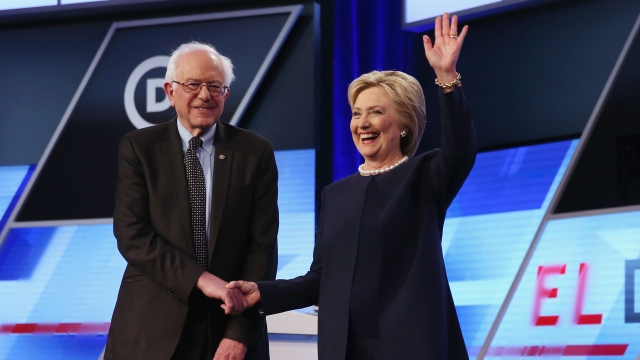 SMS
Contested Democratic Convention Isn't Likely Thanks To Superdelegates
By Eugene Daniels
By Eugene Daniels
April 10, 2016
The GOP could be headed to a contested convention, but that is much less likely to happen with the Democrats.
SHOW TRANSCRIPT

It seems like the media's excitement of a possible contested GOP convention is becoming bipartisan. Sunday, both Hillary Clinton and Bernie Sanders faced questions about a contested convention on the Democratic side, which neither really answered.

"I intend to have the number of delegates that are required to be nominated," Clinton told CNN's Jake Tapper when he asked if she was preparing for a floor fight in June.

A contested convention on the left is less likely than one for the GOP thanks to the more than 400 superdelegates who ultimately get to vote for whichever candidate they want come ballot time. But superdelegates weren't around for the 1980 election.

Heading into that convention, Sen. Ted Kennedy had lost the delegate race, but the perceived weakness of incumbent President Jimmy Carter as a general election candidate prompted Kennedy to try to convince delegates to change convention rules so they could vote for him instead.

Kennedy also argued he had the movement and momentum needed to win the general election. But Kennedy failed, and on the first ballot, Carter was renominated, and his competitor dropped out of the nomination race.

The key word here is "pledged." Technically, it wouldn't matter if Clinton or Sanders lost the pledged delegate race, assuming one of them reaches the necessary 2,383 delegates with the help of superdelegates. In 2008, then-Sen. Obama didn't actually have enough pledged delegates to clinch the nomination, but when superdelegates were added, it put him over the top.

So if Sanders is able to make up his more than 200 pledged delegate deficit to pass Clinton, getting superdelegates to come to his side would be a much easier sell than it is now.

This video includes images from Getty Images and clips from C-SPAN, MSNBC and Bernie 2016.