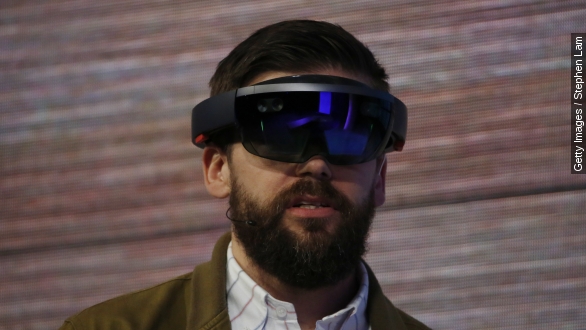 SMS
Consumer Takeaways From Microsoft's Developer Conference
By Evan Thomas
By Evan Thomas
April 30, 2015
Microsoft's Build 2015 conference is aimed at developers, but consumers have a lot to look forward to when Windows 10 hits shelves.
SHOW TRANSCRIPT

"Windows 10, as I said, is not just another release of Windows. It is a new generation of Windows," Microsoft CEO Satya Nadella said.

While a big chunk of its keynote involved databases, machine learning and APIs, we everyday consumers got some peeks at what the new OS will bring to our computers.

Such as software tools that will let developers move apps designed for Android or iOS over to a Windows environment with minimal tweaking.

That's good news for anyone who wants to play "Candy Crush" on their desktop, but The Verge notes it means Microsoft will get access to entire ecosystems' worth of app-builders and their audiences.

"Supporting both Android and iOS developers allows Microsoft to capture everyone who is developing for mobile platforms right now, even if most companies still continue to target iOS first and port their apps to Android at the same time or shortly afterward."

Edge will run on Windows 10 desktops and smartphones alike, with Microsoft's voice assistant, Cortana, built in.

And just as Windows can absorb Android and iOS apps, Edge can run Firefox and Chrome extensions after some basic adjustments.

Whether this will be enough to entice users back to a Microsoft Web browser remains to be seen, but hey, at least it's not Internet Explorer anymore.

On the mobile side, a new feature called Continuum turns Windows 10 smartphones into something that looks more like a full computer.

Connect a display, mouse and keyboard and the phone will act as a pared-down Windows desktop. It omits a few features, namely some third-party apps and the traditional Windows taskbar. (Video via Microsoft)

And Microsoft has apparently been hard at work on HoloLens since we last saw it.

The company says the headset will bring Windows 10 universal apps out of the computer and "project" them onto any available surface. (Video via Microsoft)

How long we'll have to wait for all these advances, though, is still up in the air.

Microsoft hasn't announced a release date for Windows 10, but some leaks point to a possible July arrival.