These Conjoined Twins Were Finally Separated Thanks To A Rare Surgery 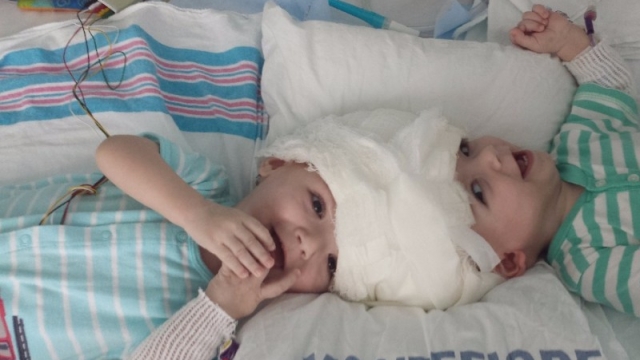 "Well, we did it." That's what the doctor told Nicole and Christian McDonald on Friday after he successfully completed a dangerous 16-hour surgery to separate their conjoined twin boys.

SEE MORE: Twins Pretend To Sleep After Hearing Mom On The Baby Monitor

"You make the craziest faces, man," Christian told one of the boys.

Jadon and Anias McDonald were born joined at the head a little over a year ago. Separating them was going to be a challenge.

The boys shared a blood vessel and brain tissue. If anything went wrong during the procedure, one or both of them could have died or suffered major brain damage.

Nicole McDonald confirmed Friday on Facebook that the separation was a success.

But she says the twins, one of whom was still in surgery early that morning, are "definitely not out of the woods by any means."

She added in the post: "We are standing on the brink of a vast unknown. The next few months will be critical in terms of recovery and we will not know for sure how Anias and Jadon are recovering for many weeks."

CNN reports the twins' surgery was the 59th of its kind in the world since 1952. Nicole says the boys will be intubated for at least a week and that doctors will "go from there."