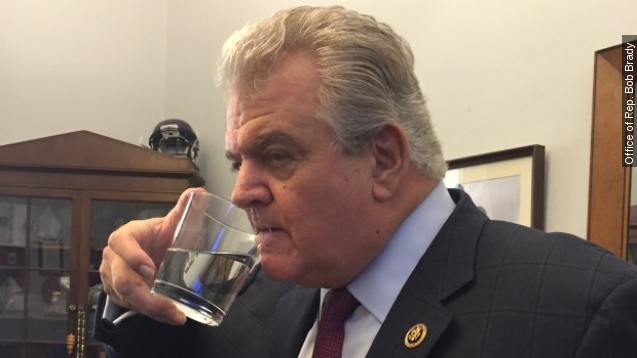 This is Pope Francis' glass of water. (Video via Speaker of the House John Boehner)

Congressman Bob Brady of Pennsylvania swiped Pope Francis' leftover water — and drank it — after the pontiff's address to a joint session of Congress.

He wasn't greedy, though. The Democrat and devout Catholic shared the goods with his wife and two staffers.

After the address, according to Philadelphia Daily News, Rep. Brady "calmly headed to the lectern and delicately picked up [the] glass, holding it by two fingers, one at the bottom of the glass and one at the rim."

He told CNN, "I'm considering it as holy water. ... I mean, the pope drank out of it, the pope handled it ... It's good enough for me." As we understand it though, technically it's not holy water since the pope didn't bless it.

He told multiple outlets he's saving the rest of the water to sprinkle on his grandchildren.

This video includes images from the Office of Rep. Bob Brady and music by Chris Zabriskie / CC by 4.0.