Congressman From California Is A Vape Crusader 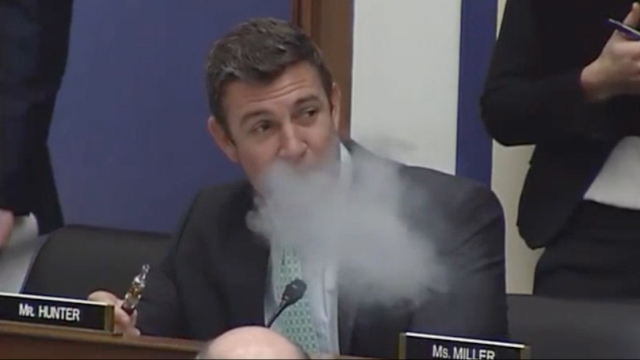 "First, I'd like to say this ... So, this is called a vaporizer," Congressman Duncan Hunter said while exhaling from his vaporizer.

Rep. Duncan Hunter from California is a vape crusader.

He used his vape pen and a thick vape cloud during a Transportation Committee meeting Thursday.

The committee discussed an amendment to ban vaping on planes.

"You spoke about vaping devices, but you did not say you oppose electronic cigarettes," Rep. Eleanor Holmes Norton said.

"This is a personal vaporizer. We actually don't even call them electronic cigarettes anymore but they're not cigarettes," Hunter said.

"I did note that the gentleman did emit smoke from the vaporizer," Norton said.

"There's no smoke in this. There are no carcinogens. It's vapor," Hunter said.

And what's a committee hearing on vaping without a weed joke?

"The other substances, by the way, can refer to what's legal in Oregon and Washington state," Hunter said.

"Maybe we'll just vote on it as is. We don't want to get into that discussion," Rep. Peter DeFazio said.

The amendment passed, so vaporizers may soon be banned while you fly.

Most airlines already ban them anyway.

But at least Duncan will have this moment to replay over and over.