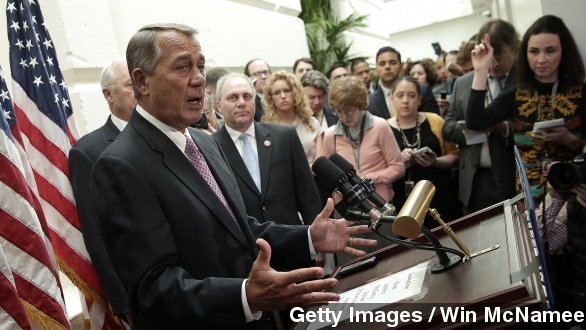 Lawmakers narrowly averted a partial shutdown of the Homeland Security Department only to have come back next week and do this all over again.

With just two hours to go before funding was set to expire for the department, the House voted in favor of a one-week funding extension. President Obama signed the bill into law Friday night. (Video via C-SPAN)

And while lawmakers bought themselves some time with that short-term measure, they've done nothing to resolve the stand-off over the department's budget and the president's executive actions on immigration.

"If you meet the criteria, you can come out of the shadows and get right with the law," President Obama said.

As some Republicans see it, the president’s actions are unlawful and must be curbed — even if that means letting the Homeland Security Department go without funding. (Video via The White House)

Those conservative hardliners didn’t like it because the bill did not include any of the so-called “riders” in it that would undercut the president’s immigration policies.

Many conservatives again voted down the one-week measure for the same reason. But House Democrats this time supported it on the condition they'd see a longer-term funding bill next week.

"We believe that within the next seven days, hopefully five, that we will have a bill that takes us to the end of the year," Minority Leader Nancy Pelosi said. (Video via Fox News)

Speaker Boehner's office, however, is denying claims that he and Pelosi's office have made a deal. Congress must pass a bill by March 6 to keep the agency funded.