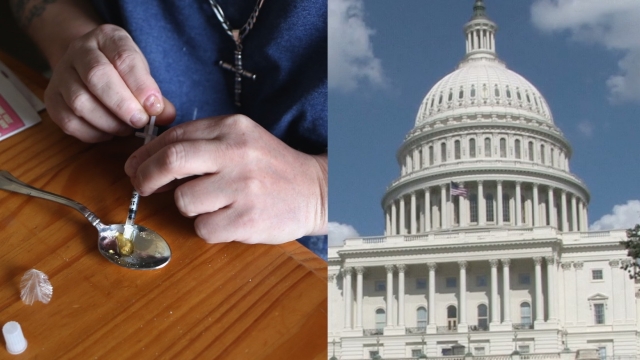 SMS
Congress Passes Bills To Curb Opioid Abuse –– Without Any New Funding
By Eugene Daniels
By Eugene Daniels
May 12, 2016
The only money attached will help provide grants. It's hundreds of millions short of what the White House says it needs.
SHOW TRANSCRIPT

Congress has taken a big bipartisan step this week to help combat heroin and painkiller abuse in America –– it just forgot to add the money.

The House has passed bills that provide, among other things, treatment for substance abuse and better education. On Thursday, a measure that would authorize more than $100 million in grants from 2017 to 2021 passed with near-unanimous support. The Senate passed its own plan in March.

But the caveat here is none of these bills provides any new money for the crisis — instead, the House is redirecting money from other sources to fund its proposals.

The Obama administration requested $1.1 billion in new funding months ago; it says the current crop of bills "would do little to help the thousands of Americans struggling with addiction" and added, "These trends will not change by simply authorizing new grant programs, studies and reports."

But there's disagreement about how to fund the bills. Democrats want bills passing emergency spending, while Republicans want to handle it through normal spending proposals.

Opioid abuse has become an increasing problem in America. The Centers for Disease Control and Prevention says between 2000 and 2014, nearly 500,000 people in the U.S. died from drug overdoses. And 78 Americans die every day from an opioid overdose.