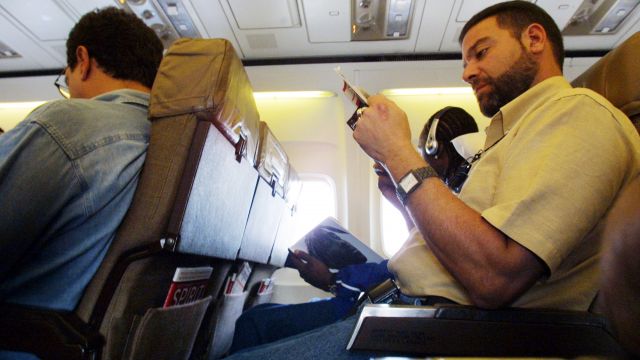 SMS
Congress Allows Airlines To Keep Shrinking Your Seat
By Katie Link
By Katie Link
April 7, 2016
Members of the U.S. Senate voted 42-54 against a proposal to stop airlines from shrinking seats.
SHOW TRANSCRIPT

If the airlines somehow manage to make your airplane seat smaller than it already is, Congress might be partially to blame.

On Thursday, members of the U.S. Senate voted against a measure that would have stopped airlines from shrinking seat sizes.

The pro-legroom proposal was introduced by Sen. Chuck Schumer.

“Over the last few decades, between the size of the seat and the distance between the seats, the flying public has lost half a foot of their space. Flying is not pleasant anymore,” Schumer said.

His idea to fix that was to give the Federal Aviation Administration power to enact a standard for a minimum seat size. His fellow senators didn’t go for it. The proposal was rejected with a 42-54 vote.

A similar measure failed in the House a couple months ago. So if our lawmakers aren’t looking out for our scrunched-up legs, who is?

Definitely not the airlines themselves. Their goal is clear: swap personal space for more passengers. Airbus, we're looking at you.

Some travel advocacy groups out there,though, say they’ve got your back and will keep fighting to stop the shrinking.