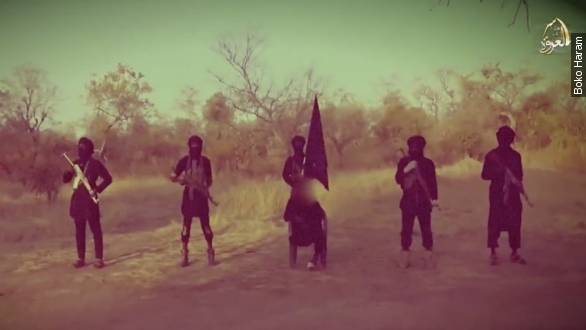 On Tuesday, a handful of news agencies reported that Boko Haram had kidnapped more than 400 women and children from the Nigerian town of Damasak. (Video via Boko Haram)

"It's been reported that hundreds of civilians including many children by Boko Haram extremists," reported BBC.

BBC and Reuters reported a few residents of the northeastern Nigerian town said the militant group carried out the mass kidnapping earlier this month.

But by Wednesday, the story had gotten a lot less clear.

The Washington Post and AFP reported that a Nigerian spokesperson denied the story. The Post quotes him saying, "There was no kidnapping there. The people have been rescued and moved to IDP camps."

But the BBC quoted that same official, Mike Omeri, as saying that there was a kidnapping, but with fewer victims than had been reported, although he couldn't say how many had been seized. He also said the militants were using some women and children as "protection."

Damasak, the town where the abductions are supposed to have taken place, was controlled by Boko Haram for months. Earlier this month, troops from Chad and Niger recaptured the town and drove the militants out.

Last week, officials found a mass grave of some of Boko Haram's victims outside of town. The shallow grave held more than 100 bodies and an official said they were probably killed 2 months ago.

If this many people are really missing, and if Boko Haram was behind it, it wouldn't be a new tactic: the group has kidnapped hundreds of women and children.

But this would be an even bigger mass kidnapping than the one last April when Boko Haram abducted more than 200 schoolgirls, bringing the group international attention and sparking the "Bring Back Our Girls" campaign.

In the aftermath of that kidnapping, the Nigerian government also gave conflicting reports about what had happened, initially claiming it had rescued the girls.

But by most accounts, many of the schoolgirls are still missing, and Boko Haram's leader has said they were married off.

So far, a coalition of Nigeria's neighbors appears to have had some success in pushing the group back. A Nigerian government spokesman said Tuesday only three areas in northeastern Nigeria are now under Boko Haram's control.