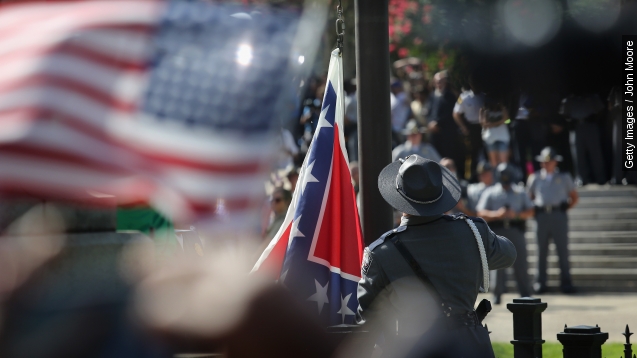 SMS
Confederate Flag Comes Down From SC Statehouse Grounds
By Evan Thomas
By Evan Thomas
July 10, 2015
The Confederate flag has come down at the South Carolina statehouse. It will be transferred to a nearby military museum for preservation.
SHOW TRANSCRIPT

For the first time in more than 50 years, the Confederate flag has come down on the South Carolina statehouse grounds.

South Carolina’s state senate voted 37-3 to remove the flag shortly before the state's house concurred — though more reluctantly — in a 94-20 vote.

“The people of Charleston deserve immediate and swift removal of that flag from this grounds. We can save for another day where this flag needs to go,” said Rep. Jenny Horne. (Video via C-SPAN)

South Carolina governor Nikki Hayley signed the bill, and the flag came down to end an incredibly tumultuous month for the state. (Video via C-SPAN)

Heightened civil rights attention and debate followed the June 17th shooting in Charleston, where prosecutors have charged Dylann Roof with the murder of nine churchgoers. (Video via CNN)

“In South Carolina, we honor tradition. We honor history. We honor heritage. But there’s a place for that flag, and that flag needs to be in a museum, where we will continue to make sure people can honor it appropriately,” Hayley told NBC.